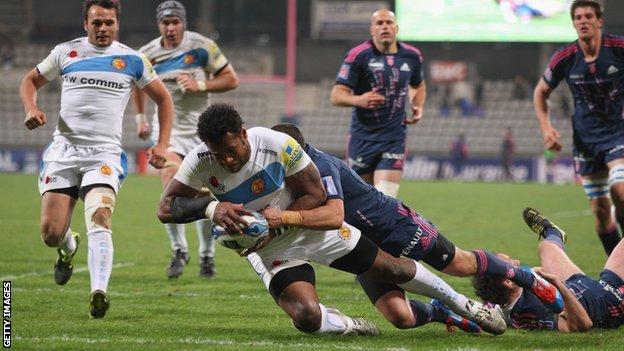 Both sides started slowly in an error-strewn first half dominated by the boot in which the Chiefs' Ignacio Mieres outscored Stade's Julien Dupuy 9-6.

But the hosts class showed after the break as Djibril Camara went over and Dupuy's boot kept them ahead.

Exeter made a nervy start but their mistakes were matched in number by those of their opponents in a poor-quality opening.

The visitors took the lead on 21 minutes through Mieres, and the Argentine doubled the Chiefs' lead on 25 minutes when his countryman Felipe Contepomi was yellow carded for throwing a punch at Chris Whitehead.

Stade pulled three points back when Dupuy added a penalty on the half-hour but they were let off when Richard Baxter was deemed not to have grounded the ball over the line shortly after.

Mieres re-established a six-point lead for the Devon men but, restored to 15 men, Stade started to deploy an offloading game and won a penalty, at the scrum, on the stroke of half time which Dupuy slotted to make it 9-6.

Stade exploded into the second half with a fantastic restart and when Contepomi's deftly weighted kick-through met Phil Dollman, the full-back fumbled possession to allow his opposite number Camara to dab down in the corner.

The first scrum after the break saw the Chiefs pulverised and concede a penalty from which Dupuy punished them from 48 metres out.

Mieres stemmed the flow with a penalty but Dupuy produced another huge shot at goal to reclaim a five-point lead for the hosts on the hour.

Substitute Naqelevuki carried over two defenders for his try after the Chiefs had laced together several phases of possession but Mieres was off target with the extras.

The fly-half then missed a routine drop-goal in front of the posts with four minutes to go after substitute Kevin Barrett's searing break from scrum-half.

And it proved costly when the brilliant Dupuy broke to provide the winning pass to Williams to go over.

VIEW FROM THE CHANGING ROOMS

"I think that we wanted it more in the end because they had plenty of ball. We knew that they were a good team because we had scouted them a lot so we knew exactly what we were in for.

"We said at half-time that this one was going down to the wire and it certainly did. For use backing up from the match against Toulouse in the French top 14, which was a huge disappointment for us, was really a great effort by the team.

"I reckon that Exeter are going to make the Premiership top four because I think that they believe in themselves. They look like they are very well coached, he's got them very well drilled."

"I am disappointed but it was a very good performance and a strong desire to get after the game and do everything we could to win it but we just came up a little bit short.

"It was a big performance, the boys worked very hard and did a lot of really good things. Just one thing would have turned it but that is what happens in big games and I am certainly not going to worry that we lost today.

[On his brother Richard's disallowed try] "Everybody this side of the stadium clearly saw that it was a try.

"You have a touch judge this side looking at it who must have seen it as a try yet because they go to the TMO to double check and they haven't got the camera angles and we don't get a try.