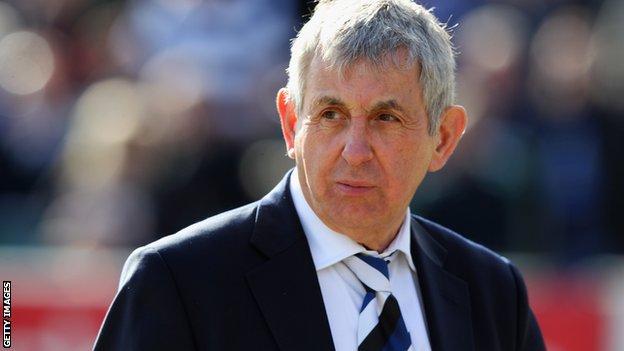 Director of rugby Sir Ian McGeechan will leave Bath at the end of the season after just a year in charge.

McGeechan, 65, arrived in 2010 as performance director, but moved to his current role after Steve Meehan's exit.

Bath have struggled domestically and in Europe this season and lie eighth in the Premiership table with three rounds of the regular season remaining.

The future of forwards coach Martin Haag is also uncertain with his contract due to expire in the summer.

McGeechan's departure could mark the end of what has been a stellar coaching career.

1972 - Makes first of 32 appearances for Scotland as a player, including nine as captain

1974 - Features in the Lions' 'invincibles' tour of South Africa

1986 - Becomes Scotland assistant to Derrick Grant, before being named coach of his country in 1988

1989 - Leads Lions to a series win in Australia

1993 - Takes Lions on tour of New Zealand, losing the series

2009 - Leads Lions to a memorable series defeat in South Africa

The four-times Lions coach was initially brought to The Rec following a spell as an advisor at Gloucester.

He arrived on a two-year deal financed by the big-spending Bath chairman Bruce Craig, who subsequently installed the former Lions coach as director in 2011, after Meehan agreed to step down.

But McGeechan, a former Scotland international who played 32 times for his country and coached the side to a Grand Slam in 1990, has struggled to re-establish Bath as a force in the Premiership, with the side losing 11 of their 19 league games so far this season.

And the Bath director recently publically apologised to fans after watching his side go down 26-6 to Northampton in the Premiership.

That result left the club four points adrift of Gloucester, who currently lie sixth in the Premiership - and in the final Heineken Cup qualifying position.

Despite his recent lack of success, McGeechan has a rich history in the game, having guided Wasps to Heineken Cup, Premiership and Anglo-Welsh Cup wins.

He was knighted in 2010 for his services to rugby, and engineered series wins with the Lions in Australia in 1989 and South Africa in 1997 - and then reinvigorated the tradition in South Africa three years ago.

Former Bath back Mike Catt, who spent 12 years with the side, has also been linked with the position.