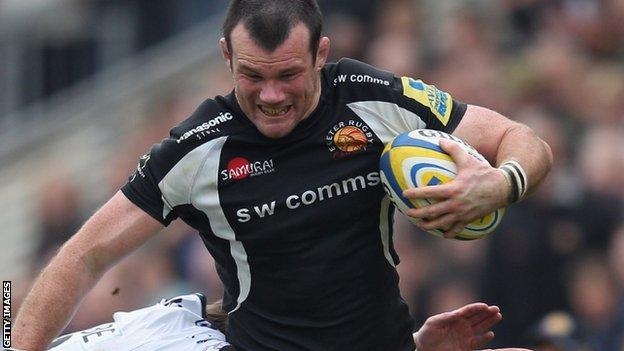 Exeter Chiefs skipper Tom Hayes believes the Amlin Cup quarter-final tie at Stade Francais is the most important match in the club's history.

Thursday's game in Paris is the first time the Chiefs have made it through to the knock-out stages of a European tournament.

"It is the biggest game for the club, we've never played at this level before," Hayes told BBC Devon.

The in-form Chiefs have won six of their last seven matches.

"There was a whole lot of euphoria attached to the promotion wins against Bristol and certain wins in the Premiership, but when you look at it really the Amlin Cup is probably the highest level of competition the club has ever played in," said Hayes.

With the likes of Tom Palmer, Felipe Contepomi, Pascal Papé and Byron Kelleher in their ranks, Stade have a much more experienced international line-up than Exeter.

But Hayes says he and his teammates will relish taking on established international names.

"This is the rugby we want to be at and there's no point in us being afraid of being here," said Hayes.

"We have to try and enjoy the challenge. We realise they've got some massive names and Stade has been a marquee name in rugby for 10 or 15 years now.

"But they're the big challenge that we have to relish and we have to face up to."