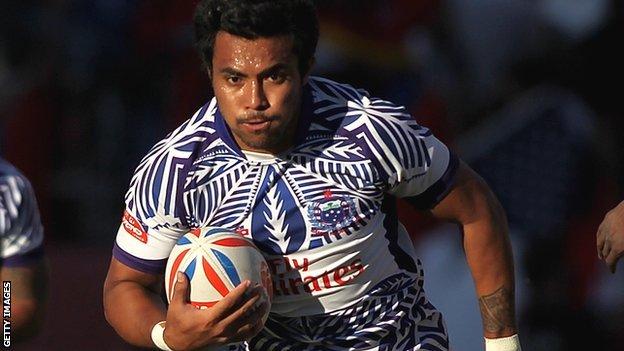 Four players have committed to new contracts at Bristol.

Fautua Otto, 26, Mariano Sambucetti, 32, Dan Montagu, 28, and Rhys Lawrence, 23, have all agreed to stay at the Memorial Stadium for next season.

Meanwhile, Junior Fatialofa has opted to return to his native New Zealand for personal reasons.

The 31-year-old centre has been with the Championship club since joining from Exeter Chiefs in 2008-09 season and has made 66 appearances.

Samoa centre Otto, who arrived in November 2011, has been a key player in Liam Middleton's squad this season, scoring nine tries in 17 appearances so far.

"He's become a bit of a try-scoring machine," head coach Middleton told BBC Radio Bristol. "He's got a good strike rate with the ball in hand and I think he's a developing player.

"In this environment we've seen Fautua get better and better."

Argentina lock Sambucetti has been at the club seven years and is one of the longest-serving players in the current squad, while Wales Under-20s hooker Lawrence was one of Middleton's first signings at the start of the campaign.

"Sambucetti is a great guy for our environment as he encapsulates our values as a club, " continued Middleton. "In certain games he is the perfect guy.

"Rhys is probably the best carrier in the competition. His work around the pitch is phenomenal and he has a bright future because his engine is huge and he offers us so much in the field."

Number eight Montagu signed for Bristol from Nottingham at the start of the 2009-10 season and has made 79 appearances.

"Montagu is a big man for a number eight. He's got fantastic aerial skills and has a good engine on him," added Middleton.