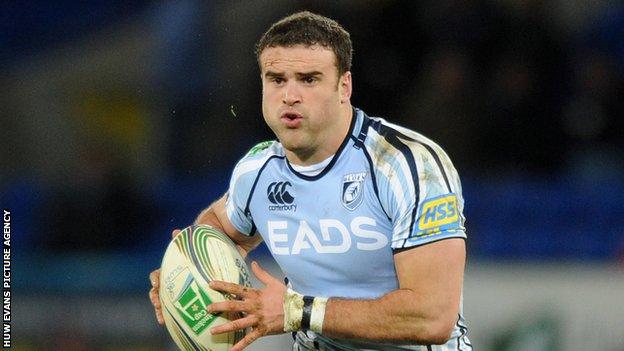 Centre Roberts is out for six months with a knee ligament injury, which will be operated upon on Thursday.

With Roberts out along with Wales captain Sam Warburton (shoulder), Bennett fears for the Blues.

"It makes their task for me almost impossible against Leinster," he said.

The Blues are already up against it having warmed up for the match with a 31-3 defeat in Glasgow in the RaboDirect Pro12 last Friday.

That was the game in which Roberts suffered a recurrence of his knee injury.

On top of that, the region suffered a public relations nightmare with the sacking of Gavin Henson following his alcohol-fuelled misbehaviour on a Saturday flight from Glasgow to Cardiff.

But despite the distractions of Henson, the Blues are on a poor run of form having lost four of their last five to Glasgow, Scarlets, Newport Gwent Dragons and Munster.

And they will not be at full strength. Lock Paul Tito, hooker Rhys Thomas and prop Fau Filise all sidelined alongside Roberts and Warburton.

"The Blues aren't playing particularly well and let's be frank they were dreadful up at Glasgow last Friday," said Bennett.

"Leinster are the the best team in my opinion in Europe. [They have] all their stars back from the Six Nations for this game [and] they beat Munster last weekend."

The Blues, who insist the Henson sacking will not affect their preparations, are taking a realistic view of their chances at the Aviva Stadium in Dublin on Saturday.

"Everybody will write us off, which in all fairness, is quite nice for us because there will be no pressure," said Burnell.

"If we go there, give it our all and if we come away with a good performance and a good result it will be totally unexpected.

"Nobody is going to expect us to go there and win," said Burnell.