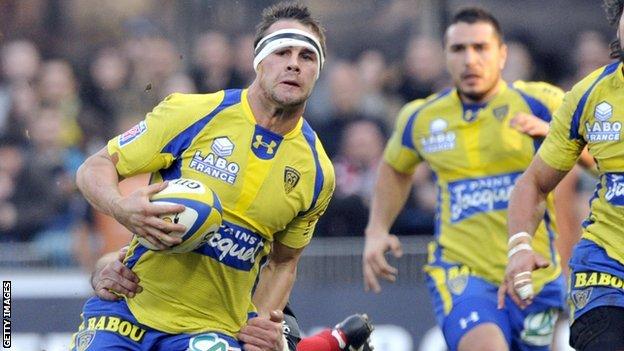 Wales and British and Irish Lions full-back Lee Byrne says higher wages are the primary factor behind the exodus of Welsh players to French clubs.

Byrne joined Clermont Auvergne from the Ospreys before this season and says he and other Welsh players have doubled their earnings by moving to France.

But that figure is set to rise before next next season.

Phillips is with Bayonne and Hook plays for Perpignan, and the £3.5m salary cap for Heineken Cup squads each of Wales' four regions will operate under next season has prompted four more Test players to pledge their futures to French teams.

Gethin Jenkins (Toulon), Huw Bennett (Lyon), Luke Charteris (Perpignan) and Aled Brew (Biarritz) are also due to follow Byrne across the Channel, although none of the French clubs has yet to formally confirm those deals.

In an interview with Friday's Sport Wales programme on BBC2 Wales, Byrne says: "At the end of the day, if I'm honest, a lot of it [the departures to France] is down to money.

"People also want to play abroad, but it's a short career and if someone gets offered a higher paid job - and it's also in a high level league - why wouldn't you take it?

"The cultural things add up, but it's mainly down to the money.

"There's a salary cap coming at home, people have families, and it is a short career. You have to make the most of it.

The atmosphere here on match day is like an international game. I signed a three-year contract, I'm playing every week and I couldn't be happier

"I don't blame any of the guys. Best of luck to them.

"It is probably double the money in France that you could earn at home in Wales.

"If someone was offered double the money in a nine-to-five job, then they would go. It's a no-brainer, really."

Whilst funding in Welsh rugby is squeezed, the French clubs are still enjoying investment from both businesses and local government.

Clermont, in the Massif Central, are still backed by the Michelin tyre company whose headquarters are based in the city, and the club have gathered an elite squad from around the world.

As well as a number of leading French stars, such as Aurelien Rougerie, they also boast international players from New Zealand, South Africa, Scotland, Italy, Fiji, Georgia, Canada and Portugal as well as Wales.

French-based players also enjoy lower tax rates than in the UK and take advantage of looser regulations regarding earnings from image rights.

But Bryne, who was kept out of Wales' Grand Slam-winning team this season by his full-back rival Leigh Halfpenny, also says he was attracted by the regular 18,000 capacity sell-out attendances at Clermont.

He added: "As a player, you want to play in front of these crowds, week-in, week-out. The atmosphere here on match day is like an international game.

"I signed a three-year contract, I'm playing every week and I couldn't be happier."

Byrne will be playing Watford on Sunday, where Clermont face Saracens in the quarter-final of the Heineken Cup.