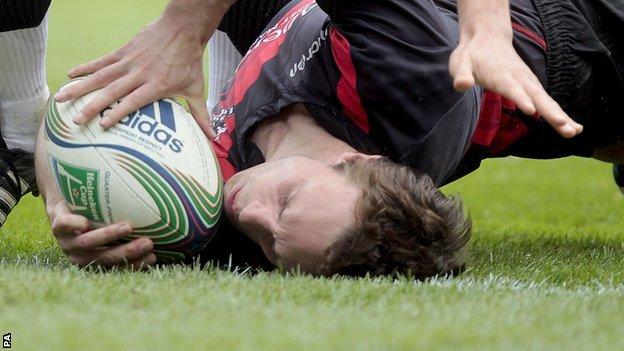 Edinburgh became the first Scottish side to reach the Heineken Cup semi-finals as they toppled four-time champions Toulouse at Murrayfield.

And a late Laidlaw penalty sealed the win in front of 37,881 fans - a record crowd for a Scottish club game.

Edinburgh will now play either Munster or Ulster at Dublin's Aviva Stadium on Saturday 28 April.

Going into the game, both history and form were against Edinburgh. Toulouse are the most successful club ever in the Heineken Cup, while the Scots were playing in the quarter-finals for just the second time, having lost away to Toulouse on their only previous appearance at this stage in 2004.

The French giants are also currently top of the French Top 14, while Edinburgh are second from bottom of the Pro12, the only club below them - Aironi - set to go out of existence at the end of the season.

But Edinburgh were in no mood to be overawed and took the lead after only two minutes.

Fly-half Laidlaw thumped a kick high into the 22, Toulouse winger Manatavou was unable to take the ball under pressure from David Denton and Blair was on hand to collect.

The scrum-half went over the line on his back in a tackle but was eventually ruled to have dotted down after a review by the television match official, Laidlaw converting.

Toulouse's power then began to tell and a hat-trick of Beauxis penalties put them 9-7 up before they extended their lead with a dazzling solo try from Matanavou.

There looked to be little danger when he fielded a high kick on his own 10m line but electric footwork took him through the massed ranks of the Edinburgh pack, before straight-out speed saw him outpace the cover to score in the corner.

The hosts had by this point been reduced to 13 men after yellow cards for Allan Jacobsen and Ross Rennie, but they defiantly cut the gap to only four points at the break as Laidlaw banged over a long-range drop-goal.

With Edinburgh back to a full complement, Toulouse then found themselves reduced to 14 men as hooker William Servat played the ball in an off-side position.

And Edinburgh took full advantage, with Laidlaw landing two penalties to give them a 16-14 lead with just under half an hour to play.

It seemed inevitable that Toulouse's greater experience would tell as the half wore on but it was Edinburgh who upped their game, dominating territory and possession but finding themselves unable to make the final breakthrough.

Toulouse managed a couple of desperate late attacks but the hosts had the last word, Laidlaw landing his third penalty as Edinburgh secured a historic win.