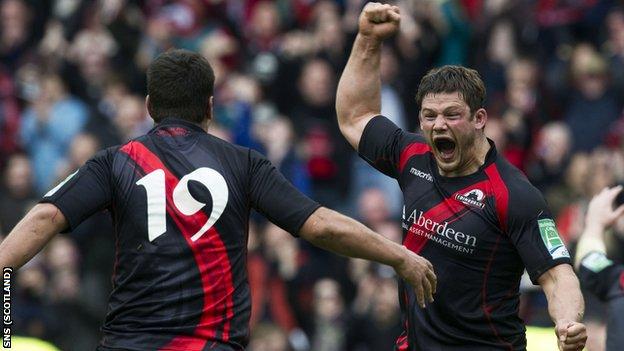 Coach Michael Bradley paid tribute to the 37,881 fans that cheered Edinburgh to victory over Toulouse for a place in the Heineken Cup semi-finals.

A record crowd for a quarter-final in Britain saw the home side win 19-14 at a cacophonous Murrayfield.

"We had close on 40,000 people here and I think they were a factor," Bradley told BBC Radio Scotland.

"With 20 minutes to go there was one score in it and the boys really dug deep with the crowd behind them."

Edinburgh became the first Scottish side to reach the last four of Europe's premier tournament after an early try by Mike Blair and a string of successful kicks from Greig Laidlaw.

And Bradley's side had to come from behind to overhaul the four-time winners, who scored an outstanding try through Timoci Matanavou and added nine points from Lionel Beauxis.

Allan Jacobsen and Ross Rennie were both shown yellow cards in the first half but the home team battled impressively to trail by just four points at the interval.

"On the second yellow card, when Ross was binned, we were delighted that they went for a kick at goal," Bradley said.

"I think the reason they did that was because it was such a tight game.

"If they had put the pressure on and got a potential try it could have caused us difficulty.

"To hold them to that score in that period was great credit to the boys and the effort they put in.

"We carried some good ball and were able to maintain our composure.

"In the final 10 minutes, Toulouse were really pushing the button to try and get some turnover ball but our lads took the hits and supported each other well."

Much of Edinburgh's success in the Heineken Cup this season has been down to their exciting backs but the pack played a key role in overcoming the visitors.

"Toulouse are a powerful scrummaging unit and their line-out is very challenging," explained Bradley.

"I thought we went well in both areas and on their ball in particular."

A trip to Dublin to face Munster or Ulster is next for Edinburgh and Bradley is looking forward to a return to his native Ireland.

"It's a fantastic thrill for us to be going to the Aviva Stadium," he said.

"This could be the start of something very positive for Edinburgh Rugby."