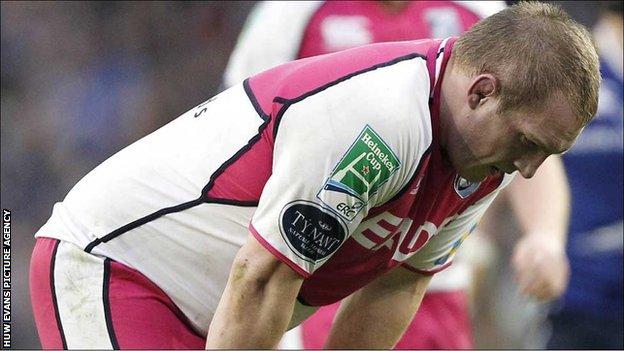 Coach Gareth Baber has admitted Cardiff Blues' European thrashing by Leinster is a warning of the "tough" times ahead when many of their stars have left.

Leinster thrashed the Blues 34-3 in the quarter-final as the Irish team stepped up their bid to win the Heineken Cup for the third time in four years.

The loss was the final "big stage" game that Gethin Jenkins, Casey Laulala and Martyn Williams would play together.

Asked if the margin of defeat was a warning, Baber said: "Yeah, of course."

Wales' four regions - the Ospreys, Blues, Newport Gwent Dragons and Scarlets - are operating a £3.5m salary cap from next season and Blues chairman Peter Thomas has warned Wales players at Welsh regions will no longer be paid while on international duty.

But the Blues insist Welsh Grand Slam heroes Leigh Halfpenny and Jamie Roberts, both of whom are contracted until the summer of 2013, will not join the Cardiff City Stadium exodus this summer.

"We're going through a bit of pain at the moment," said Baber.

"And probably we'll go through a little bit more pain in the next year but we have to develop a new crew of players.

"That is why we're recruiting the players we have and developing our own - and that has to be the focus of the next couple of years at the Cardiff Blues."

The Blues have lost five of their last six games and their run of four straight defeats is their worse since the start of the 2009-10 season.

Blues skipper Xavier Rush felt Saturday's loss at Leinster was an end of an era for the region as he admitted: "This is was the last time that a lot of these guys will be together in this environment on this stage.

"We wanted to end on a really positive note but it wasn't to be as we were beaten by a better side."

But Baber has insisted the Blues they "have plenty to play for this season" despite being out of Europe and huge outsiders to reach the Pro12 play-offs.

"We want to finish as high as we can in the Pro 12. It is tough, it is a tough stage of the season and everybody is tired," said Baber.

"We're all hurting as it is not nice to be where we are at. We have to make sure we come out with something positive before the end of the season."