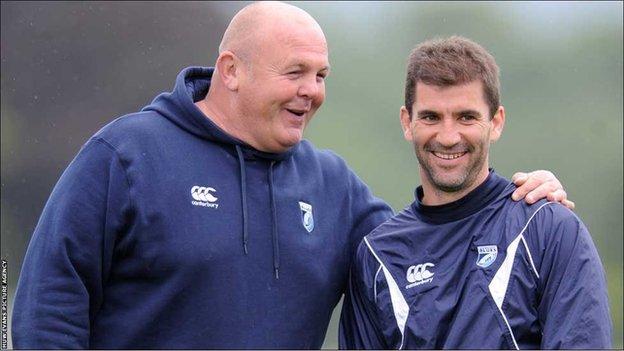 Leinster demolished the Welsh region in Saturday's Heineken Cup quarter-final in their fourth successive loss and are to lose a host of stars this summer.

Burnell and Baber were confirmed as joint caretaker coaches until the end of the season after Dai Young left.

"I think Burnell and Baber will be under pressure," Davies told BBC Sport.

"Not only for the performance here but perhaps almost the disintegration of the Blues team this year."

Wing Alex Cuthbert's Blues contract expires in the summer and the Welsh Grand Slam winner has warned he has had interest from big-spending French clubs - and Baber has warned of "tough" times ahead.

Coaches such as former Wasps director or rugby Tony Hanks, Grand Slam winning ex-Wales coach Mike Ruddock and current Wales skills coach Shaun Edwards were linked with the Blues job before forwards coach Burnell and skills boss Baber were appointed for the rest of the season.

"I'm not sure of the Blues ambitions and how far those ambitions stretch," said former Cardiff chief executive Davies.

"We're all aware of the financial restrictions on the Blues and the other regions in Wales.

"In professional sport you have to pay for top quality, be that coaches or players.

"And with the restrictions on the Blues budget, I think it prohibits perhaps them going out and getting a so-called world class coach."

Baber and Burnell did surprisingly guide the Blues into the quarter-final of Europe but the team have slipped out of Pro12 play-off contention after a run of four defeats in their last five games.

Leinster then dumped the Blues out of the Heineken Cup in Dublin on Saturday in a 34-3 thrashing and Davies admitted: "It is worrying for Blues fans.

"I'm slightly disappointed as I thought the Blues, with half the team are disappearing, would have put on that one final show [against Leinster].