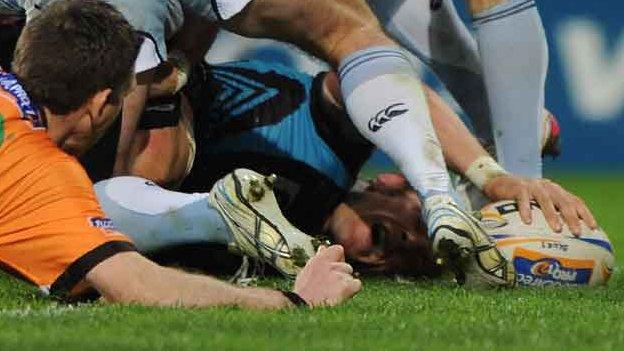 The Ospreys scored 27 unanswered second-half points against Cardiff Blues to leave them on the brink of a Pro12 play-off place.

Adam Jones and Tom Smith then went over and Biggar added conversions to his side's three tries.

It was Cardiff's fifth successive defeat and increased the chances of a home tie for the Ospreys in the last four.

Veteran Williams more than held his own in that contest, but the Ospreys' forward power proved the difference.

Blues centre Gavin Evans left his side a man short for 10 minutes in the ninth minute after he was judged to have deliberately knocked on while attempting to intercept.

Fly-half Ceri Sweeney went to the sin-bin for a similar offence in the 53rd minute and shortly before his return, the Ospreys had scored their first try.

Referee George Clancy brandished his yellow card, but the Ospreys were unable to take advantage of his absence as the Blues bettered their opponents.

Veteran Williams more than held his own in that contest, but the Ospreys' forward power proved the difference.

The visitors' momentum grew in the second-half with Biggar's boot bringing them level.

Lock Jones cut back at a defence-breaking angle off scrum-half Rhys Webb's pass to power over.

Prop Adam Jones followed up six minutes later as he charged over from a close-range ruck.

And the front-row forward was instrumental in pushing the home back over their line for replacement number eight Smith to score.