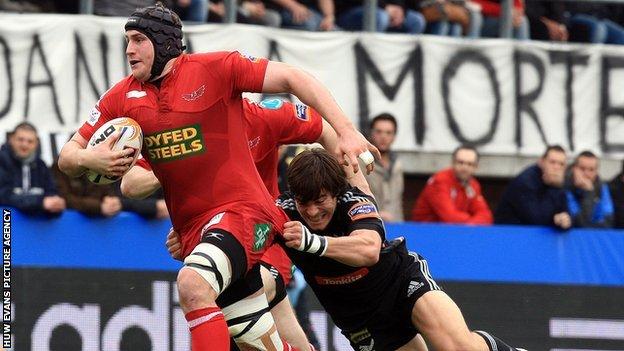 The Scarlets kept their Pro12 play-off hopes alive against spirited Aironi, but missed out on a bonus-point win.

Nigel Davies' side saw the hosts erode their 16-6 half-time lead and come back again at the end after again falling 10 points down.

Johnathan Edwards, Liam Williams and Ben Morgan went over for the Scarlets.

The kicking of Rhys Priestland and Aironi's Tito Tebaldi and Luciano Orquera accounted for the rest of the day's points.

The Scarlets were forced into a late pre-match change when captain-for-the-day Jonathan Davies was ruled out by a minor groin strain.

Stephen Jones took over at centre and Adam Warren came on to the bench while Josh Turnbull assumed the captaincy role.

Aironi, fired up their governing body's decision to revoke their league licence at the end of the season, matched the Welsh team in the opening stages.

Priestland exchanged penalties with Tebaldi and Orquera against a backdrop of banner-wielding protests in the stands.

The passion for Aironi's survival was evident on and off the field where the hosts' scrum proved a potent weapon throughout.

However, former Wales defence coach Rowland Phillips' side were guilty of indiscipline at the breakdowns, which allowed the Scarlets some relief in the early exchanges.

Fly-half Orquera went to the sin-bin for illictly killing a Scarlets attack in the seventh minute.

Promising Scarlets prop Rhodri Jones - who had a tough game in the scrums after switching to tight-head - popped a pass off the floor to set the opening try move in motion.

Veteran Stephen Jones also helped break the deadlock, also passing the ball off the floor to help send flanker Edwards over for the opening try.

Aironi lost flanker Simone Favaro to the sin-bin in the 35th minute, Priestland also punishing him with the penalty that gave the visitors a 16-6 half-time lead.

But Turnbull followed Favaro to the bin in the 45th minute and after Orquera's penalty Aironi levelled as they forced the penalty try against the Scarlets' seven-man scrum.

Liam Williams put the visitors back ahead with a well-worked try on the hour and Morgan went over to bring the bonus point back into Scarlets sights.

Despite their desperate attempts, that ambition failed and Toniolatti finished off a long-range counter-attack to give the hosts a bonus point for finishing within seven points of the victors.