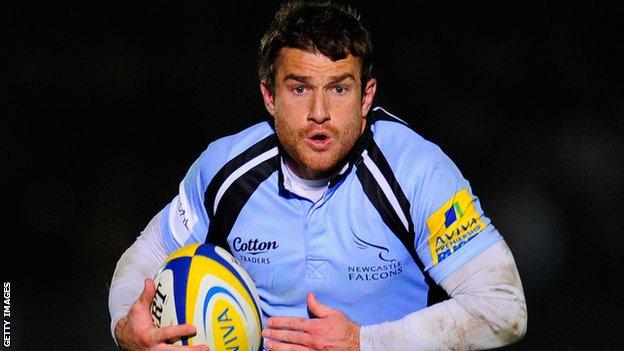 Newcastle fly-half Jeremy Manning has been ruled out for the rest of the season after having surgery on ruptured ligaments in his right thumb.

The 25-year-old has scored 41 points in 16 games for the Falcons this season.

He was hurt after scoring two tries in a friendly with the British Army during a training camp in Portugal last week.

"It was very frustrating to be told that I would be missing the rest of the season and it has certainly come at the wrong time," Manning said.

"I am not sure how I actually picked up the injury, but after I scored my two tries I made a couple of tackles so it must have happened in the tackles," the New Zealander told the club's website.

Manning, who joined Newcastle from Munster in 2010, missed the start of this season after suffering a hip injury.

He will miss the final three Premiership fixtures of the season as Newcastle try and avoid finishing bottom of the table.

The Falcons go to Gloucester, host Saracens and then have a possibly decisive final match of the season at second-from-bottom Wasps on 5 May.