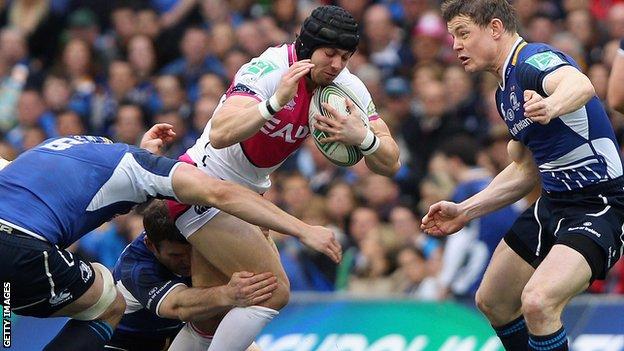 And Welsh involvement in European competition is over for another season following defeats for Cardiff Blues and the Scarlets over the Easter weekend.

"It's going to be a very bad, bad year for Welsh rugby," said Lewis.

The four regions - Cardiff Blues, Newport Gwent Dragons, Scarlets and the Ospreys - have announced a salary cap of £3.5m which will begin at the start of the 2012-13 season.

A number of Welsh internationals, including Gethin Jenkins, Luke Charteris, Huw Bennett and Aled Brew have announced they will ply their trade in France next season.

You can't blame the players for going where the most money is being offered. Loyalty is gone these days

And former Wales player Lewis believes it is inevitable more players will follow suit, to the detriment of regional rugby.

"I can see a lot of players leaving either to play in England or in France and unfortunately that is going to affect the regional game," said Lewis

"It might help the national game because obviously there will be more players playing in Wales and eligible to play for Wales.

"It's all down to money at the end of the day. You can't blame the players for going where the most money is being offered. Loyalty is gone these days."

Wales' involvement in the European competitions came to an end following defeats for Cardiff Blues in the Heineken Cup and Scarlets in the Amlin Challenge Cup.

The Cardiff Blues were thrashed 34-3 by Leinster while the Scarlets fell to a 15-11 defeat against Brive.

"Nobody expected them [Blues] to win out in Leinster but having said that I expected a better performance," said the former Cardiff player Lewis.

"It showed a lack of coaching there if anything. There was no structure in the way they played. Lack of discipline and they played like individuals.

"I think the score flattered them more than anything. At one point I thought it would be more than 50 points.

"That game could have gone either way. At least they were in it and they were competing at all aspects of that game."

Despite disappointment in Europe Lewis believes the season is not over for the Welsh regions in the Pro12 with three rounds of matches remaining before the play-offs.

"I would imagine the Ospreys would go through now the way they're performing," added Lewis.

"The only other opportunity we've got is having the Scarlets to win their next three or four games. If they do that then hopefully they'll be fourth.

"But they've got to depend on results from Ulster and Glasgow.

"And hopefully with two Welsh regions there we might be able to compete with Leinster in that aspect as well."