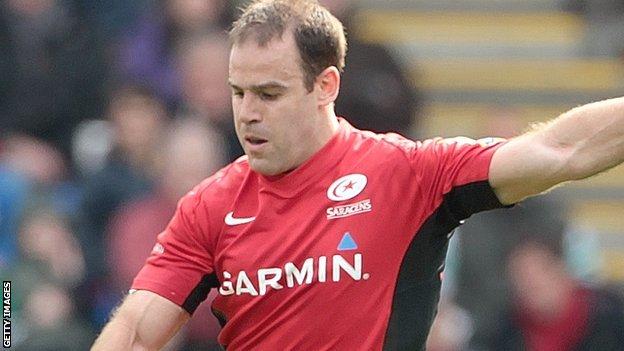 Champions Saracens slipped to third in the Premiership despite Charlie Hodgson kicking 23 points as the visitors came from behind to beat London Irish.

Irish's Delon Armitage got the only try in a first half dominated by kicking.

Will Fraser then went over for Saracens and although Armitage scored again for the hosts, 11 more points from the boot of Hodgson saw the visitors home.

Despite Saracens' victory, they slip to third, a point behind Leicester, after

Homer then added two successful penalties to give Irish a six-point advantage, while Hodgson's kick soon reduced the deficit to three.

Armitage, who had been on the bench for Irish's last two matches, scored his first try following a perfectly-timed pass from Jonathan Joseph.

Hodgson kept the visitors in touch with two well-struck penalties in the final four minutes of the opening half.

Saracens' two-point half-time deficit was turned into a one-point lead as Hodgson kicked them in front the first time, while London Irish flanker Jamie Gibson went to the sin-bin.

The visitors made the most of their one-man advantage, winning a line-out and producing a 20m rolling maul which ended with Fraser touching down and Hodgson converting to put them 22-14 ahead.

But Irish, restored to 15 players, hit back with Armitage's second try, as he skipped past three players to go over.

Hodgson kicked his fouth penalty to ease any nerves, but the visitors were then reduced to 14 men when Fraser was yellow-carded for tackling Homer in the air as the young full-back collected a high kick.

Irish conceded two penalties as they tried to press home their advantage but Hodgson denied them even the consolation of a losing bonus point with his second drop-goal in the final minute.