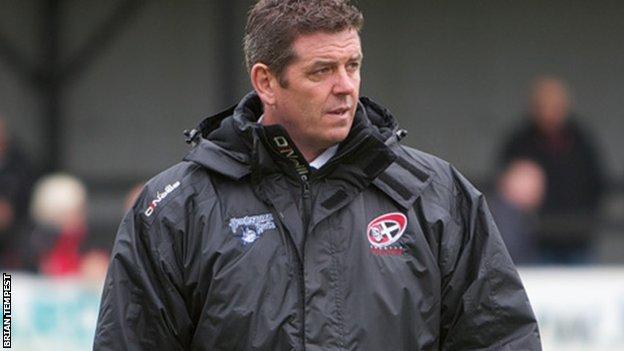 Cornish Pirates boss Chris Stirling will leave the club on Sunday to take up a role with the New Zealand RFU.

Stirling's decision comes after the club said they were not able to play Premiership rugby next season as plans for a new stadium have been delayed.

He will work as high-performance talent identification manager for the NZRFU, while forwards coach Ian Davies will become the head coach of the Pirates.

"There was no clarity or future," Stirling told BBC Radio Cornwall.

Stirling, who has left his family back in his native New Zealand while he has been in Cornwall, added: "My wife, myself and daughters had numerous discussions and decided enough was enough. I needed to be there and become a husband and a father again.

"If things were going to happen and things were moving forward, myself and my family could justify living apart because there was a means to an end.

"But with an uncertainty something needed to be done and I made a decision that I needed to stick by my family.

"I don't want to leave the Pirates but it's a case of where I am at with my life."

Stirling will be in charge of the Pirates for the last time on Sunday in their home game with Bedford.

He took the top job at the Mennaye after Mark Hewitt was sacked in February 2009, having initially joined the club in 2008 as a consultant to help them overcome the new experimental law variations.

Stirling took the Pirates to the Championship play-off final last season where they lost to Worcester and the club also won the British and Irish Cup in 2010 under Stirling's leadership.

"Chris has overseen an incredible run of success at the Pirates," said chairman Dickie Evans.

"His modesty and temperament has been equalled by his incredible vision, foresight, knowledge and skilful man-management.

"Despite tight budgets being in place, we've all been able to enjoy moments that will remain in the memory long after Chris departs."

And Stirling says the club is still capable of getting into the top flight of English rugby.

"I still think the Pirates will make the Premiership," he said.

"The Premiership wasn't something we focused on, I felt in the first year if we made the play-offs we'd be happy.

"But the third year was the year when we were going to push on, but unfortunately it didn't quite work out.

"I have fantastic memories, for all the progress that the club has made and I can honestly say the development that I have made as a person and a coach has been huge."