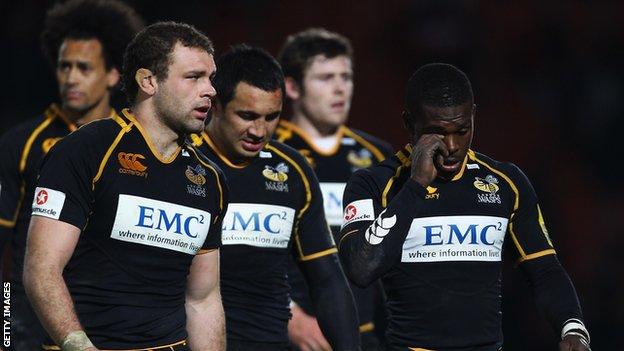 An 'imminent takeover' of London Wasps has fallen through, the Premiership strugglers have confirmed.

Owner Steve Hayes has been actively trying to sell the club since October and four parties were interested back in February.

But in a statement the High Wycombe-based outfit said they were seeking fresh interest following stalled talks.

Hayes announced his desire to sell up after Wycombe District Council decided not to back plans for a new stadium.

Wasps chairman Mark Rigby added: "London Wasps has a long and successful history and is one of the best known brands in the game, and the board is convinced that the right backer exists.

"With a great squad in place and the excellent Dai Young at the helm, we believe we are set to make a strong impact next season.

"Time is however short and we urgently need a new investor or consortium to back this belief."

The statement said the board, after independent advice, could confirm that London Wasps Holdings Limited remained a going concern.

Wasps are enduring a torrid domestic season. They have won just two of their last 12 Premiership fixtures and sit second from bottom in the table.

The 50-year-old businessman was one of two men arrested in February as part of Operation Tuleta, the investigation running alongside Operation Weeting, which was set up to probe alleged law-breaking at News International.

He is currently on bail until June, subject to further enquiries.