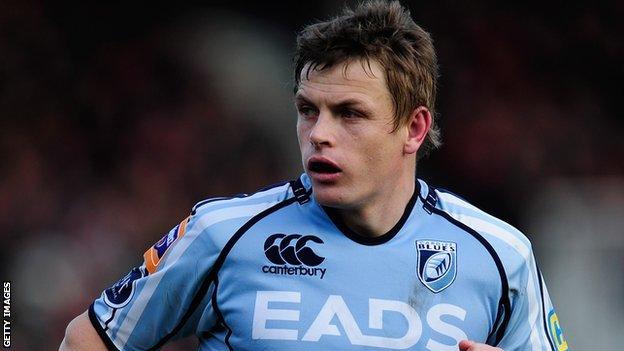 Blair, whose Blues contract expires at the end of the season, has been linked with a move to French Top 14 side Agen.

Casey Laulala, Gethin Jenkins, Dan Parks and Richie Rees have already confirmed they will leave the Blues in the summer.

"It would be a disappointment if he goes," said Baber of 33-year-old Blair.

"Ben has been a big part of the Cardiff Blues for six years and he was part of the EDF Energy Cup and Amlin cup winning teams.

"But teams change and we are at a point as regions, especially here at the Cardiff Blues, that we have to get on with the change.

"Losing Ben is a blow but we're resilient enough to make sure we've got players behind that are coming through."

But Baber did add he could not confirm if Blair was to leave the Cardiff City Stadium and added: "That's up to Ben and his agent but nothing has been said to us in terms of a release from the Cardiff Blues."

Blair, capped four times by the All Blacks, joined the Blues in June 2006 from Canterbury and has scored 1,070 points in 114 appearances for the Welsh region.

But the 2007-08 Blues Player of the Season has played just seven full games in the last two seasons after being sidelined for 15 months with a career-threatening knee injury.

Wing Alex Cuthbert's Blues contract expires in the summer and the Welsh Grand Slam winner has warned he has had interest from big-spending French clubs - and Gareth Baber has warned of "tough" times ahead.

"We have a crop of players that are the wrong side of 30 years of age," said Baber.

"And with budget cuts in place as well, probably there simply isn't the salaries that can match what they can get in France."