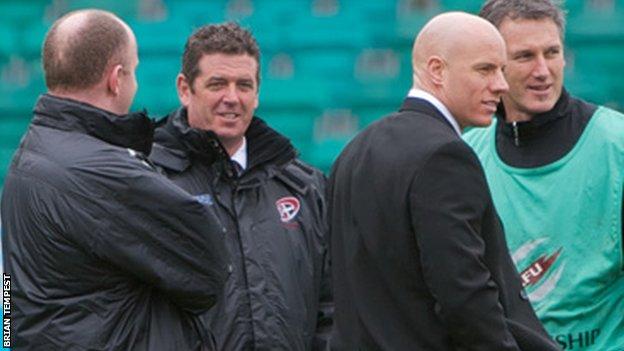 Forwards coach Davies will take over following this weekend's Championship play-off match against Bedford, after Stirling announced he was taking up a role with the New Zealand RFU.

"Ian is a very capable rugby coach and manager of people and he will do fantastic job," Stirling said.

"The culture will be the same but it will have an Ian Davies flavour to it."

Stirling continued: "If I was going to compare the two of us I'd say Ian is a little bit harder than I am.

"Ian's got a more ruthless edge to him, but the players know that because of the way that Ian, Harvey [Biljon] and myself work as a team.

But Stirling says the future of the club's coaching staff will hinge on whether the new Stadium for Cornwall is built on the outskirts of Truro.

"At the moment the club will go with two coaches, but a lot will be decided when there's clarity on the future and things could change very rapidly."

"If the stadium gets confirmed and is built and ready for the 2013-14 season then things could change drastically through the 2012-13 season."