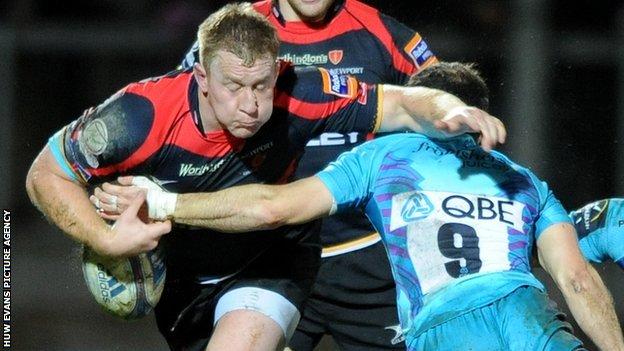 Wales and Newport Gwent Dragons hooker Lloyd Burns has retired from rugby because of a neck injury and faces the prospect of heart surgery.

Medical tests have revealed Burns, who has been out of action since January, has damaged his aorta.

The 27-year-old, who won seven Wales caps, made his international debut against the Barbarians in June 2011.

"His enforced retirement has come as a massive shock to Lloyd and his family," said Dragons director Robert Beale.

Burns, who made 33 appearances for the Dragons, played for Cross Keys in the Principality Premiership before he emerged for the Men of Gwent.

His was a real rags to riches story, having been a bricklayer before he earned a contract with the Dragons and then being selected for Warren Gatland's 30-man Wales squad for New Zealand 2011.

He played in the pool games against Samoa, Namibia and Fiji, scoring his one and only international try against the Fijians.

And Roberts, who is currently recovering from knee surgery, wrote: "Sad news about Lloyd Burns' retirement from rugby....great player, good bloke....here's to a speedy recovery."

Beale said everything Burns had achieved in life had been "earned through hard work and dedication".

He added: "I am personally relieved that this serious condition has been identified off the field of play and would therefore like to thank our medical team at the Dragons, staff at the Royal Gwent Hospital and University of Wales Cardiff for all their efforts in ensuring Lloyd has and will continue to receive the highest standards of care."