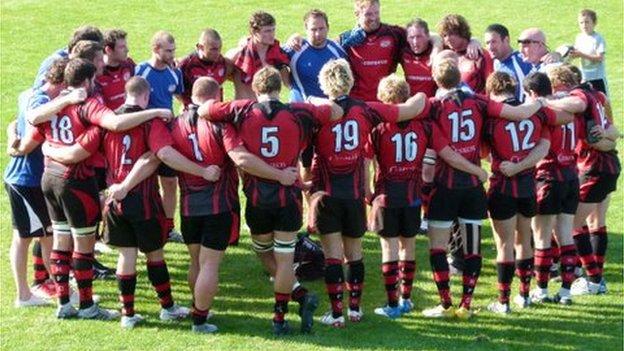 Even the most optimistic Jersey fan would have struggled to predict the stunning success the club has enjoyed in the past few years.

Saturday's 37-13 win over Coventry sealed a fourth promotion in five seasons in a remarkable rise through the English rugby pyramid to the Championship.

While that progress might have gone unnoticed by many outside the 45 square mile Channel Island, for those living there it has been hard not to get caught up in the wave of excitement.

Just seven years ago Jersey were playing in London South West Division Three. Fast forward to 2012 and the Islanders have emerged from relative obscurity to become one of England's top 24 sides.

Perhaps making the achievement more impressive is that it has been done with a large contribution from home-grown island-born players.

Top-scorer Michael Le Bourgeois, prop Myles Landick and winger Ed Dawson are among the local boys who have grown up as the club has grown in stature.

Landick's role as groundsman shows how the club at the heart of island life is pulling together, all hands to the deck, to ensure success for the proud band of supporters.

"It's been amazing, this has been a real journey," said Landick.

"Being a Jersey boy and playing at this level, I didn't think it was achievable for me but here I am.

"It has definitely gone a lot more professional in all aspects, with the catering, the medical staff and also the playing side of things which had brought the club through the leagues.

"The club will give everything it's got to sustain its place in the Championship."

Landick is not alone in his sense of pride. Chairman Bill Dempsey has been involved with Jersey for three decades.

"I think that we've built something which is sustainable and we spend within our means.

"It's sometimes challenging but the rewards at the moment are great."

Later this year Jersey will mix it alongside famous clubs like Leeds, London Welsh, Moseley and potentially Bristol, Newcastle or Wasps in the Championship.

The island's finance industry has played a role in the success, with corporate sponsorship helping to keep the finances ticking over.

Players such as ex-Wales international Ben Evans and former Scottish Under-20 back Glenn Bryce are among the professionals in the squad.

35 - Secondary school teams on the island

4 - Promotions in the past five years

1 - Number of defeats at home across the past three seasons

Much credit though must be given to the director of rugby, Ben Harvey, who has overseen the progress at St Peter.

The former Birmingham and Solihull coach joined the club just days after promotion to London One in 2008 and his confident demeanour has been a positive driving force.

Plans are now in place to develop St Peter into a ground fit for the second tier.

There are already applications in to

High on the agenda is the need to give fans a better view of the action. An average of more than 2,000 people have crowded in to St Peter this season - far higher than any other National One side and bigger than most Championship teams.

With impressive crowds and more than 600 young academy members prepared to put their bodies on the line, the future looks bright for the island which produced England international Matt Banahan.

For Jersey to follow its most famous rugby son to the heights of the Premiership is almost unthinkable, but the islanders have already proved in the past five years that dreams do come true.