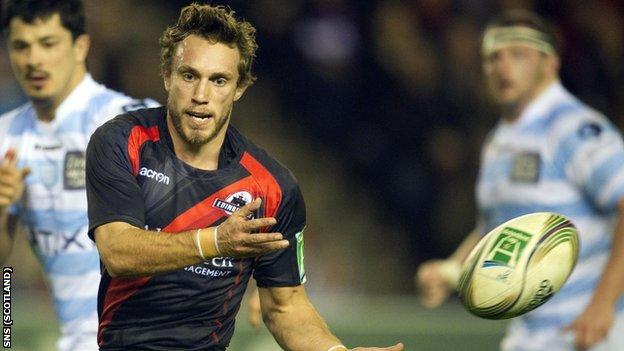 Scrum-half Mike Blair will leave Edinburgh at the end of the season, completing a decade at the Scottish capital pro-team.

Capped 80 times, Blair has made more than 150 appearances for Edinburgh.

"Being born and raised in Edinburgh, I've played all my rugby here and have been committed to Edinburgh Rugby my entire professional career," he said.

Head coach Michael Bradley said Blair had been "an incredible servant to Edinburgh Rugby and Scotland".

"We wish him all the best in the seasons ahead," said Bradley.

I remain absolutely committed to playing for Scotland

"He's one of the most naturally gifted scrum-halves of this era with a fantastic eye for a break. He is a top-class controller of the game."

Blair, 30, toured South Africa with the British and Irish Lions in 2009, has captained Scotland serval times and this season helped Edinburgh reach the Heineken Cup semi-final for the first time, scoring a try in his 50th tournament appearance against Toulouse.

"It's been an honour to represent the club which, over the years, has helped me fulfil my ambitions of becoming a regular for my country and earning selection for the Lions," he added.

"I've enjoyed myself so much here and feel I've achieved a lot, which has made this a very hard decision to make, but the time is right for me personally to throw myself at a whole new challenge.

"Rugby offers many opportunities and experiences and, while I believe that this may be one of the most exciting times to be an Edinburgh Rugby player, I don't want to regret not trying something different when I finally hang up my boots.