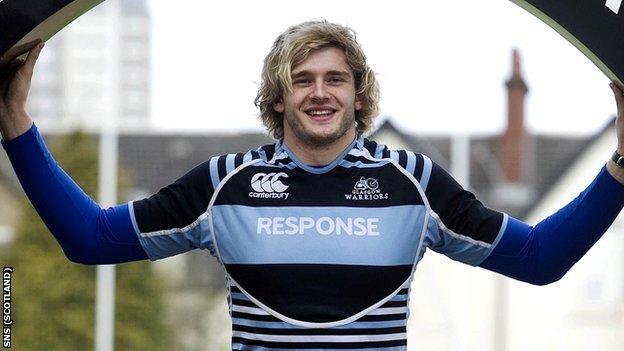 Glasgow Warriors second row Richie Gray says his side will take inspiration from rivals Edinburgh as they aim for a league play-off spot.

Warriors sit fourth in the Pro12 table, a position which would see them reach the play-offs for only the second time.

And Gray says his team-mates are spurred on by Edinburgh's feat of reaching the semi-finals of the Heineken Cup.

"Those guys can't get all the glory," he said.

"I was absolutely delighted for them - great to see a Scottish team in the semi-finals - but, in saying that, it leaves us with a bit of unfinished business."

The club has given me a huge amount. I certainly want to leave on a high

Gray also admitted the Warriors are definitely not just aiming for a play-off spot, but gunning for a second-place finish in the league.

"Second place is massive in regards of getting a home semi and the crowd at Firhill this year has been phenomenal so that's certainly something we're aiming for," said the Scotland international.

Glasgow travel to take on second-place Munster on Saturday and Gray is under no illusions as to the importance of the match.

"It's huge," he said, "Certainly, a win over Munster puts us in a great place and gives us a lot of confidence going into the final stretch.

"But we know how tough a task it is; Munster, their reputation, and their also coming off the back of two defeats, which is unheard of over there, so they'll be pushing very hard."

The lock leaves the Scotstoun-based club at the end of the season to join Sale Sharks, and admits it will be a wrench to leave after four years with the Warriors.

"It's strange," he added. "It's getting closer and closer, so I'm getting a little bit more emotional about it. I'm trying not to think about it too much, but I'm sure, the final few games, it'll all start to kick in.

"It's a big move that I've thought a lot about. Sale are certainly up and coming, they've put a lot of things in place this year, they've played some good stuff and they're sitting in a nice place in the Premiership. It's a fresh challenge for me.

"The club has given me a huge amount over the years - coaching, players, the fans have been great, so I certainly want to leave on a high."