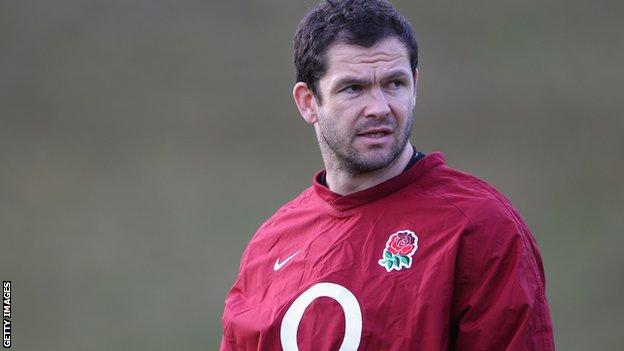 Andy Farrell will not join Stuart Lancaster's England coaching team on a permanent basis, preferring to remain with Premiership side Saracens instead.

Farrell was part of Lancaster's interim coaching set-up for the Six Nations.

Having led England to second place in the tournament, Lancaster was named permanent coach and made it clear he wanted to retain Farrell's services.

"The job isn't anywhere near half done [at Saracens] and I have decided I want to help finish the job," Farrell said.

Farrell, who is first-team coach of the reigning Premiership champions, added: "It has been a special privilege for me to be involved in the Saracens coaching staff for the past two-and-half seasons.

This is the first significant bump in the road on Stuart Lancaster's "journey", as he has become fond of calling it. Lancaster made it crystal clear he wanted Farrell on board as a trusted lieutenant and, given Lancaster's wishes, there will be questions asked as to why the RFU could not persuade Farrell to stay. Now the hunt is on for a quality backs coach. One man fits the bill perfectly: part of New Zealand's World Cup-winning coaching staff and former Northampton boss, Wayne Smith.

"We have made decent progress during this period but, in truth, as a club, we have barely scratched the surface of our potential."

Ian Ritchie, chief executive of the Rugby Football Union, said: "While Andy was clearly an important part of the coaching team during the course of the Six Nations, we fully respect his wishes to continue as a coach at Saracens.

"We will continue to work hard with Stuart Lancaster to build a world-class coaching team as we look towards the Rugby World Cup in 2015."

The trio led England to victory in all but one of their matches in the Six Nations, leading many to presume the team would remain intact for the summer tour to South Africa.

However, club loyalty has proved too strong for former dual-code international Farrell, while Saracens were keen to point out his role with England was only ever meant to be temporary.

While Rowntree has committed his future to England, Lancaster must now decide who will replace Farrell for the immediate future.

New Zealand's attack specialist Wayne Smith is interested in returning to Test rugby having helped the All Blacks win the World Cup, but Smith is unavailable until after the summer tour.