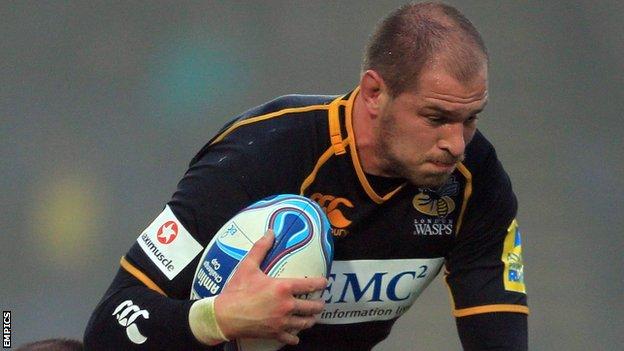 Wasps captain John Hart has been forced to retire from rugby because of a persistent shoulder injury.

The 30-year-old back row led the club 38 times and won both the Premiership and the Heineken Cup on two occasions.

"I'm really disappointed to bow out this way, but the decision was taken out of my hands," said Hart.

"I had hoped to carry on to the end of the season but after the game against Northampton (on 24 March) it was clear I wouldn't be able to."

Harty has been a lynchpin in the Wasps side for a number of years. His leadership and passion was the reason I named him captain

Hart is the latest Wasps player forced into retirement in an extraordinary season at Adams Park that has been coupled with poor results and financial concerns.

Steve Thompson, Dan Ward-Smith, Joe Worsley and most recently Tom Rees have been forced to bow out of the game this term.

Hart tore knee ligaments in a European Challenge Cup match with Bayonne in December and spent three months on the sidelines.

But he then aggravated a shoulder injury when he returned to action against Northampton last month.

He added: "I've had great support from the club in this matter and I want to thank everyone for that through a difficult time."

"Harty has been a lynchpin in the Wasps side for a number of years and I've been hugely impressed with him in my short time at the club," said Wasps rugby director Dai Young.

"His leadership and passion for Wasps was the reason I named him my captain at the start of the season.

"It's sad to see him have to retire before the season is out."