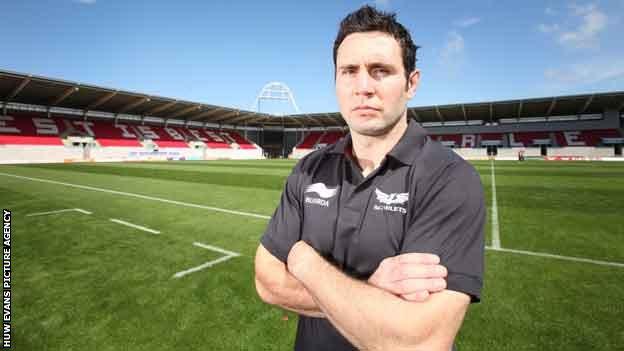 Jones, 34, has signed a two-year deal to play for the Aviva Premiership club.

Davies said: "I said that we could look to find an opportunity for him in the coaching set-up here. But Steve was adamant that he wanted to play."

He added that Wasps's offer to Jones, Wales' most capped player, was "probably too good to turn down".

"He has never shied away from a challenge and at his age, I think a new challenge is exactly what he would need if he's going to continue playing," said Davies.

"Se he'll see it as a big challenge and want to prove himself in that league and I'm sure that's what he'll do."

Jones is out of contract at Parc Y Scarlets at the end of the season and agreed to join Wasps despite an "imminent takeover" of the Premiership outfit having fallen through.

Jones, who won six Lions Test caps on the tour of New Zealand in 2005 and South Africa in 2009, was part of Warren Gatland's 2012 Grand Slam squad, but failed to make an appearance.

He is being signed by the English club on a player's contract but his move to High Wycombe to join up with former Blues coach, David Young, could see him move into a coaching role at the end of the two-year stint as a player.

Jones has never played in the Premiership but enjoyed a successful two-year-stint playing for Clermont Auvergne in France. He returned to the Scarlets in 2006.

London Wasps released a statement on Tuesday claiming they were seeking new backers after interest from four parties had stalled.