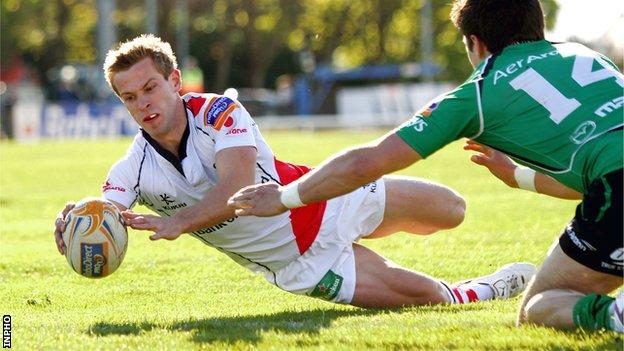 Paul Marshall could be a fitness doubt for Ulster's Heineken Cup semi-final and remaining Pro12 games after sustaining an arm injury in Saturday's defeat by Connacht.

The scrum-half headed to hospital to undergo an x-ray immediately after the game in Galway.

Marshall broke the same arm during his schoolboy career and there are fears that it could be a similar injury.

The scrum-half picked up the injury when scoring a first-half try.

Marshall's injury completed a bad night for Ulster as their hopes of making the Pro12 play-off were dealt a major blow by the defeat in Galway.

"The lads tried very hard. Connacht are a very difficult side to beat here," said McLaughlin.

"All credit to them. A great victory for them. We have no complaints at all. Our guys fought really hard but on the night, it just wasn't enough."

McLaughlin felt that his side had been "a little too soft and we gave up too many easy tries".

"We didn't get on the front foot enough."