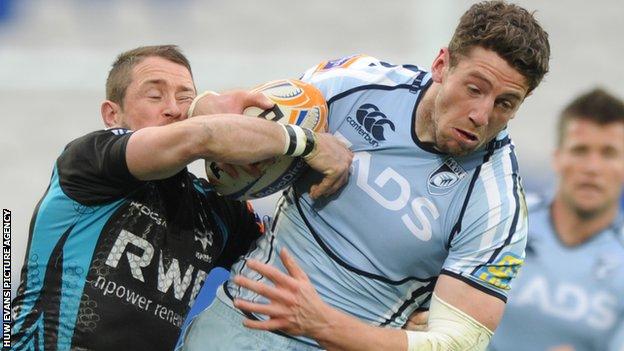 Former Wales scrum-half Robert Jones has said he would not blame Cardiff Blues wing Alex Cuthbert if he decided to move to France.

The 22-year-old Wales international has been linked with moves to French clubs Toulon and Racing Metro.

"It's obviously going to be down to money," said Jones.

"At the moment he's still on a small development contract with the Cardiff Blues [and] he's been in negotiations.

"Certainly whatever contract he will be offered, even as a top class international player, it won't come anywhere near the type of figures that the French clubs will be offering.

"I don't think anyone can blame him or any other player for leaving."

Former Wales hooker Thomas are to follow scrum-half Rees, British and Irish Lions prop , ex-Scotland international Parks and ex-New Zealand centre Laulala out of the Blues at the end of the season.

Jenkins will join Toulon, hooker Thomas is going to London Wasps while Yapp and Rees will play for Edinburgh next season.

Laulala is heading for Munster and Parks to Connacht.

During the season the Blues have also lost hooker Gareth Williams to enforced retirement and Gavin Henson to dismissal.

Veteran flanker Martyn Williams is also expected to confirm his retirement at the end of the season.

However, they also fear losing full-back Ben Blair to a French club.