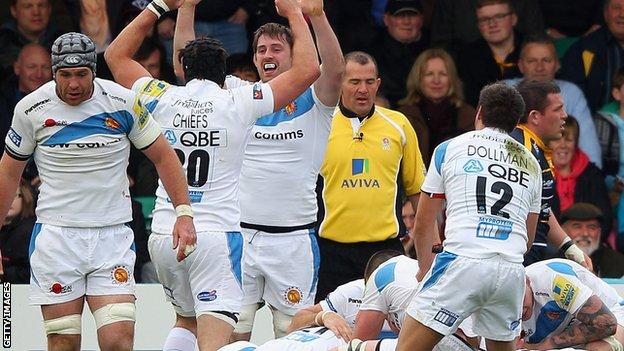 Exeter Chiefs head coach Rob Baxter has praised the character of his side after their late 31-26 win at Worcester.

Sireli Naqelevuki's try with the last play of the game sealed the win and guaranteed a first season of Heineken Cup rugby at Sandy Park next season.

"That is a massive credit to that group of players," he added.

Phil Dollman scored a try late-on to guarantee a bonus point, and Naqelevuki then scored to ensure a five-point win.

But the Exeter boss was also critical of the level that his side played at earlier in the match.

"It was the one stage of the game where I could honestly say that we really went for it.

"I think the key for our success until now has been that we've gone for it for a bit longer in bigger parts of the game.

"I don't think we went for it enough today."