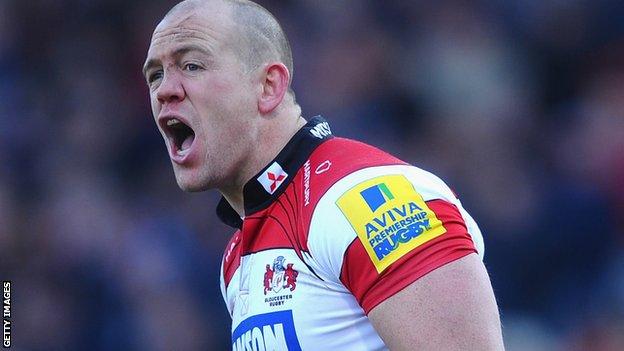 Gloucester lock Jim Hamilton has given the biggest hint yet that centre Mike Tindall is to leave Kingsholm.

Tindall, 33, has yet to be offered a new deal beyond this season.

And speaking to BBC Gloucestershire after their loss to bottom club Newcastle, Hamilton let slip: "We're in a transition at the moment and a lot of guys are leaving.

"With the likes of Nas [Luke Narraway] and Tinds, do we want them to finish their careers at Gloucester like that?"

Former England captain Tindall ended an eight-year association with Bath to join local rivals Gloucester in 2005 and has since made 127 appearances.

But the outside centre, who is married to the Queen's grand-daughter Zara Phillips, hit the headlines last year following his off-field antics at the World Cup in New Zealand.

He was removed from the England elite squad and fined £25,000 for his misdemeanours on a night out, and although he was reinstated in squad on appeal, he has not featured in coach Stuart Lancaster's plans since then.

Gloucester head coach Bryan Redpath has refused to be drawn on Tindall's future at Kingsholm, but there has been speculation that he may move to a French club for next season.

The club have not responded to Hamilton's comment after Saturday's defeat, which left the Cherry and Whites seventh in the table, one place below the qualifying places for next season's Heineken Cup.

Hamilton went on to add that it is imperative his side now focus their attentions on winning their final game of the season next week against Sale, who currently occupy sixth.

"Gloucester are a huge team, I said that when I signed here and we can't look any less than Heineken Cup rugby," he added.

"We've got an opportunity next week to put it right. We can talk about what we want to do but ultimately, we've got to get out there and get it done. The last three or four weeks we haven't done that.

"It's down to us to finish the season with a win at Kingsholm and hopefully put us in a position to play in Europe next season."