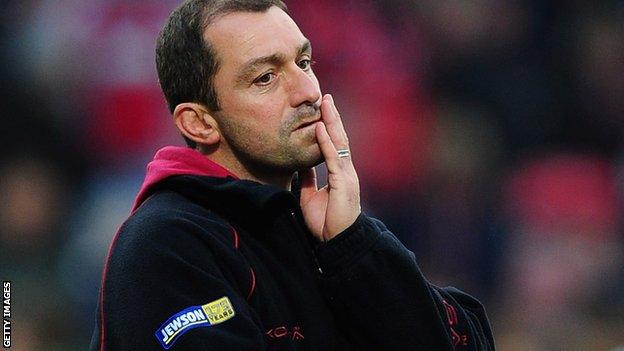 Gloucester have confirmed that head coach Bryan Redpath has resigned from his position with immediate effect.

The 40-year-old had seen his side lose four games in a row and has been heavily linked to the director of rugby post at his former club Sale Sharks.

"I've offered my resignation with a heavy heart," Redpath said.

"It's a results-driven business we're in and I hold my hand up and take full responsibility for the fact that we've not performed as we should have."

In an official club statement, Redpath continued: "I have dearly loved my time at Gloucester. It's a fantastic club in a true rugby city with devoted, passionate supporters. But I think it's now someone else's turn to take charge."

Gloucester board member Ryan Walkinshaw denied that speculation linking Redpath with a role at Sale had any bearing on the decision.

"We would like to stress that Bryan's departure is not connected with recent media speculation regarding his future and is based purely on results.

"It is with great sadness that the board accepted Bryan's resignation.

"However, he feels responsible for the recent run of disappointing results on the field of play and feels that he has taken things as far as he can. We respect that decision."

The former Scotland scrum-half, who had two years remaining on his contract at Kingsholm, joined Gloucester as backs coach in 2005 and was promoted from assistant to head coach in June 2009 following the departure of Dean Ryan.

After a seventh-place finish in his first year in charge, Redpath led the Cherry and Whites to third the following year as well as lifting the LV= Cup title - their first trophy in five seasons.

But his side have struggled to replicate that form this term, failing to progress beyond the group stages in the Heineken Cup and slipping to seventh in the Premiership.

With the departure of captain Luke Narraway,Alasdair Strokosch and Scott Lawson already confirmed, Redpath had already started to rebuild his pack for next season and captured the high-profile signings of Jimmy Cowan,Billy Twelvetrees and Ben Morgan.

But his sudden exit from the club has fuelled rumours he will now join up with Sale, who have been searching for a new director of rugby since the sacking of Tony Hanks last month.

The two Premiership rivals meet at Kingsholm on Saturday, with both vying for sixth spot and a place in the Heineken Cup next season.