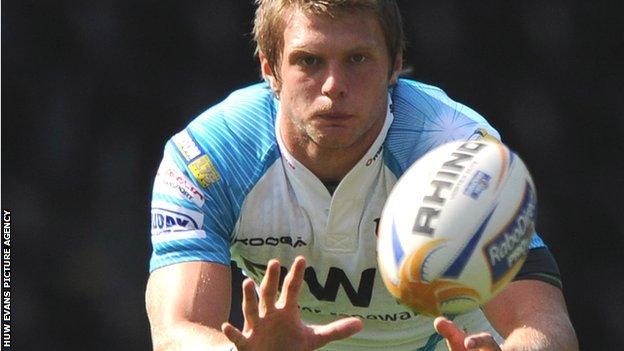 Ospreys fly-half Dan Biggar will reject any further attempts to tempt him away from the region, according to forwards coach Jonathan Humphreys.

Biggar, 22, has already turned down an offer from French club Racing Metro 92 and Ospreys say they hope to hang on to him for many years to come.

"There's truth in the fact that teams are chasing him. But Dan is contracted here and he's very happy here."

Ospreys will lose Tommy Bowe (Ulster), Huw Bennett (Lyon), Nikki Walker (Worcester) and Tom Smith (London Irish) to other clubs at the end of the season.

French clubs are taking a particular interest in some of Wales' brightest prospects, exploiting the tight financial constraints under which the four Welsh regions are operating.

But Humphreys is confident Biggar has no intention of leaving and stressed the fly-half is very much part of their long-time planning.

"He's playing the best rugby I've seen him play for a long time," he said.

"Dan is a kid who loves this region - he loves playing for the Ospreys. He's under contract for another year and hopefully he'll be here for a lot longer than that."

Biggar, who has another year left on his contract, made his 100th appearance for Ospreys on Saturday in their 12-33 Pro12 League win at Cardiff Blues.

He became the youngest Ospreys player to reach that milestone and is already the region's highest points scorer, needing another 36 to reach 1000 points.

Despite his prolific scoring Biggar has his detractors and Ospreys chief Andrew Hore appealed to the fans in March to stop booing their own fly-half.

But Humphreys says the nine-times capped Wales international has been playing with renewed confidence over recent weeks, steering his side to a potential second-place finish in the Pro12 table.

"Dan is one of these kids you either love him or you loath him," said Humphreys. "He's really turned the corner in terms of bringing all that is good in his game.

"You see it in him - he's enjoying himself, he has a massive impact on this group and I think the fact that he's far happier in himself is showing.

Former Wales captain and fly-half Jonathan Davies says Biggar's form has been instrumental in setting the tone for the rest of players in recent games.

He said: "In the last couple of weeks the Ospreys have played exceptionally well with a lot of confidence and Dan Biggar has been a huge part of that.

"He hasn't been static, he's been running on to the ball, whereas before they were playing a slow game and the backs were under pressure.

"Now they really look like they are enjoying themselves and they look in a very, very good position."