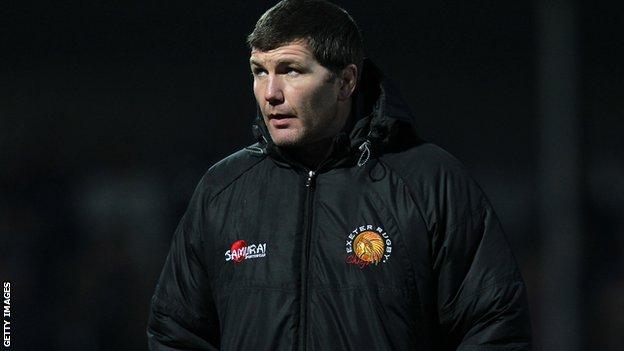 Exeter Chiefs boss Rob Baxter says his side face a "winner takes all" encounter with Northampton on Sunday.

The two sides are vying for the final Premiership play-off place with Exeter two points above the Saints ahead of their clash at Sandy Park.

There are permutations whereby if Exeter lose but get a bonus point the battle for fourth could go to the final day of the season, but Baxter is not thinking about that possibility.

"We want to be there on points and be there over the long haul," he said.

"If Northampton come to Sandy Park and win I'll be the first person walk over to Jim Mallinder and say 'Well done and good luck in the semi final'."

Exeter have surprised many in the world of rugby with their performances since being promoted to the Premiership last season.

They made the quarter-finals of the Amlin Cup earlier this month and were only beaten by a last minute try at Stade Francais.

In the Premiership, Baxter's squad, which contains few household names outside of Devon, have recorded memorable wins at the likes of Leicester,Worcester, and Sale this season.

Exeter have won seven of their last eight matches and have lost just once at home in 2012.