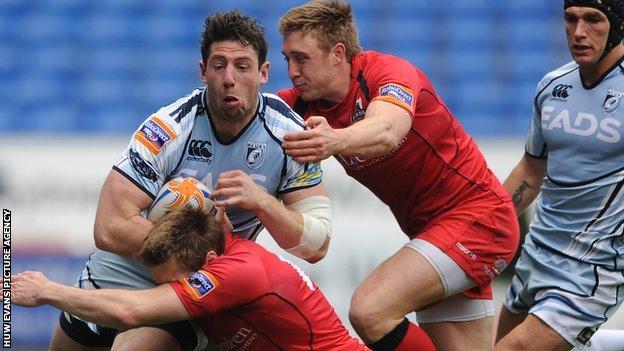 Edinburgh arrived with a weakened team as they prepared for their Heineken Cup semi-final against Ulster next weekend.

Cardiff Blues supporters bade farewell to a host of players in their penultimate match of the season.

Cuthbert could himself be among the players leaving the Blues, Wales' wing find of the season having been linked with French Top 14 clubs Racing Metro and Toulon.

If he leaves, Cuthbert will have progressed from being a Blues development player to being among the hottest properties in the game after starring in Wales' 2012 Grand Slam.

His Blues performances have been inconsistent throughout the season, but he showed his eye for the line in a confident manner against Edinburgh.

Godman kicked the game's first points with a third-minute penalty.

It took the Blues most of the opening quarter to make their mark.

Blair's break set up the platform for scrum-half Lloyd Williams to go over as namesake Martyn lurked for the scoring pass, Blair converting.

New Zealander Blair missed a penalty before Cuthbert went over for his first try to give the hosts a 12-3 half-time lead.

Godman dropped a goal soon after the break, but the visitors were down to 14 men while centre John Houston was in the sin-bin for a high tackle on left wing Tom James.

In Houston's absence Cuthbert went over in the 50th and 54th minutes as his power told on the visiting defence.

In between 20-year-old number eight Hamilton received his reward for a solid display by making the line.

But after 99-cap Wales flanker received the crowd's applause on his exit, replacement Navidi had the final word for the Blues.