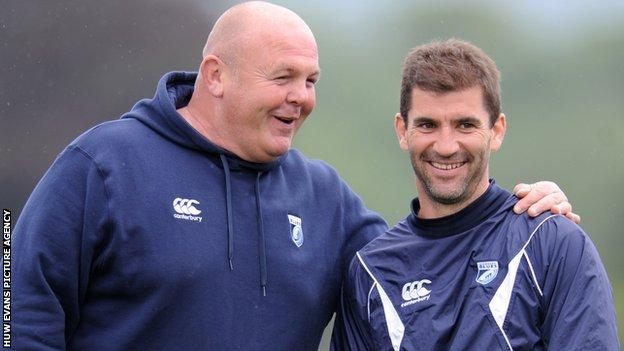 Cardiff Blues have announced they intend to appoint a director of rugby to work above the current coaches.

Gareth Baber and Justin Burnell, in charge at the Welsh region since November, have been given until the end of the season to make their mark.

They managed to take the Blues to the last eight of the Heineken Cup but recent results have been poor.

And BBC Wales Sport understands that Kingsley Jones has still not put his name to a four-year contract offer to coach Russia.

The Blues announcement comes amid a backdrop of dwindling finances and a player exodus at the Blues.

Twelve players, including Wales prop Gethin Jenkins and Wales scrum-half Richie Rees, are leaving at the end of the season, and the region fear they will also lose new Wales wing sensation Alex Cuthbert.

Details of the player drain has coincided with an alarming slump in form for the Blues, who have lost their five games in a row and have not managed a try in their last three.

The region were also criticised over their recent handling of Gavin Henson, who was sacked after a alcohol-fuelled disturbance on a flight as the squad returned from Glasgow.

Baber and Burnell were rookie coaches when they took over following Dai Young's move to London Wasps and the Blues believe the team needs a more experienced hand.

"Gareth [Baber] and Justin [Burnell] will continue in their roles but the appointment of a director of rugby will strengthen our rugby department going forward," added Holland in a statement.

"This is a positive step for the Blues as we aim to build an exciting, young squad for the future that includes a core base of Wales Grand Slam winning players.

"We are looking for a candidate who has had previous experience in this role and obviously an excellent understanding of Welsh rugby."

The Blues have no chance of reaching the Pro12 League play-offs, languishing in seventh place and 12 points adrift of the top four with two games remaining.

Their Heineken Cup hopes were ended by a thumping 34-3 defeat to defending champions Leinster.

But Holland added: "Gareth Baber and Justin Burnell must be commended for getting the team to the quarter final of the Heineken Cup.

"Being in the top eight teams in Europe is no mean feat."

"However, there is no doubting that it has been a difficult first season for them in charge of the senior side, the financial constraints being announced and players departing has contributed to this."