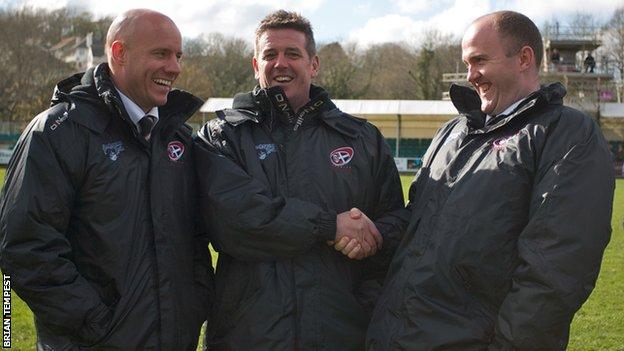 Stirling left after Sunday's win over Bedford as he returns to his native New Zealand to take up a role with the New Zealand RFU.

"I've worked alongside them and I've helped develop them as coaches and I still will, you can do that from afar," he told BBC Radio Cornwall.

"I'll still get games and I'll still watch them and give them feedback."

He added: "I know Harvey wants me to mentor him from afar.

"It's just a matter of having someone who's not here day-to-day looking from the outside giving their opinions."

Backs coach Biljon, who played as a scrum-half for Wasps, was director of rugby at Blackheath.

Former Llanelli forward Davies moved to the Mennaye from Worthing, where he was also director of rugby, to become Pirates' forwards coach and he is now the club's head coach.

Having guaranteed the Pirates a place in the Championship play-off semi-finals, Stirling says he will still keep in touch online with how his former side play.

"There'll be some very early mornings or late nights where I will tune in and listen to the Pirates and see how they're going," added Stirling.

"I really believe we can win this competition, we're in the semi-finals and we're four games away."