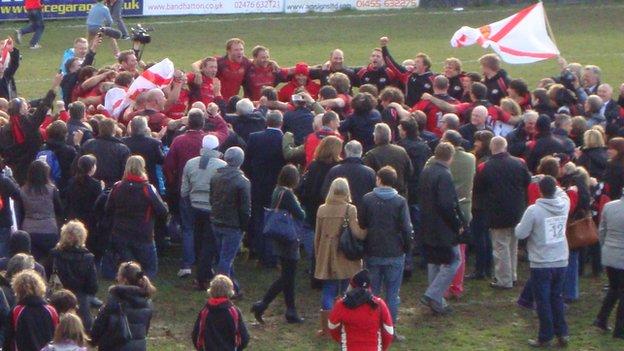 Jersey have been promoted to the Championship for the first time in their history after the islanders won 37-13 at Coventry.

A penalty try saw the visitors 13-6 ahead at the break.

Spencer Sutherland scored Cov's only try late on in front of the biggest Butts Park Arena crowd of the season.

The islanders have now clinched four promotions in the space of five years on a remarkable rise up the English rugby pyramid.

"How often does this happen, what a journey," Jersey director of rugby Ben Harvey told BBC Jersey.

"This is an amazing, opportunity. I'm not going to go in there and try and survive, I'm going to try and do the best we can, but we know how tough it's going to be."

Jersey face Fylde in the final game of the season at St Peter.

Coventry, who have dropped to 11th in the table, close the season with a trip to Cinderford.