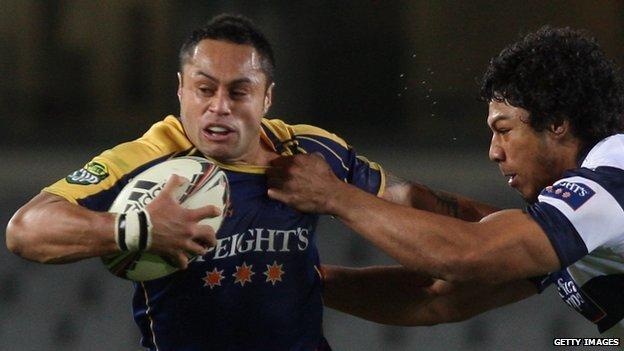 Edinburgh rugby have signed New Zealand back Ben Atiga on a two-year contract.

The 28-year-old, who was capped once for the national side in 2003, will join the Heineken Cup semi-finalists in the summer.

Atiga spent four years at Blues before moving to Highlanders in 2011.

"Ben has proven his ability on some of the toughest stages in world rugby and will be a formidable option at centre and full-back," said Edinburgh head coach Michael Bradley.

"He's a very impressive package of agility, power and skill, and I believe he'll make a big impact at this club, both from a performance perspective but also in bringing on the many talented young players we have at the club."

After winning his solitary cap against Tonga, Atiga featured for the All Blacks' HSBC Sevens World Series-winning side of 2007.

However, Atiga then opted to take a break from professional rugby in 2009 but returned for the Auckland provincial side in 2010, earning him a move to Otago and the Highlanders the following year.

With financial problems at the Otago Union, Atiga took voluntary redundancy, leaving him free to make the move to Scotland.

"It all happened very fast, probably in the space of about three weeks," said Atiga.

"The club were very interested in what I could bring to the table from a playing perspective but Michael [Bradley] also explained that he would be looking for me to play a leadership role and help bring on young Scottish players, a role which I've played with New Zealanders for the last couple of seasons and one which I'm looking forward to doing for Edinburgh Rugby."