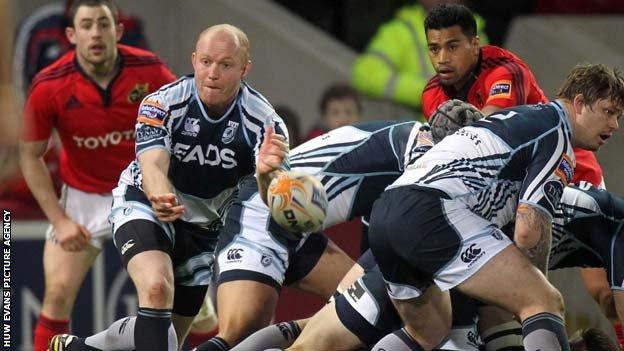 Martyn Williams, Paul Tito and Maama Molitika are among a host of senior players to leave Cardiff Blues, the region have announced.

Ben Blair, Taufa'ao Filise and Deiniol Jones are the others confirmed to leave as the Blues begin rebuilding for next season under a reduced budget.

Gethin Jenkins and Casey Laulala are among another six players to have already signed for other clubs.

A presentation will be made to them after Sunday's match with Edinburgh.

"On the field we have had some tremendous individuals, both as people and players, who have given their all to the Cardiff Blues over the best part of ten years for most of them," said Blues chairman Peter Thomas.

"Each one of them has given everything to the cause it was this group of players that brought us such fantastic success winning silverware in the EDF and Amlin Cups."

"Every team has its life cycle and a majority of the players moving on are now in their early or mid thirties."

"I'm sure that I speak on behalf of everyone when I thank them for their outstanding service and wish them the best of luck with their future careers."

Rhys Thomas,Richie Rees,John Yapp and Dan Parks are the others to be joining other clubs at the end of the season.

In Thomas, Jones, Williams, Filise and Jenkins, the Blues are losing five of the eight players who have made most appearances for the region.

Hooker Thomas, who is joining London Wasps, heads the list on 182 appearances, with lock Jones (175) second and flanker Williams (142) fifth. Both Jones and Williams are retiring.

Wales wing Alex Cuthbert is another set to exit, with French Top 14 teams Toulon and Racing Metro showing an interest.

Centre Gavin Evans has pledged his future to the region by signing a two-year extension to his contract.