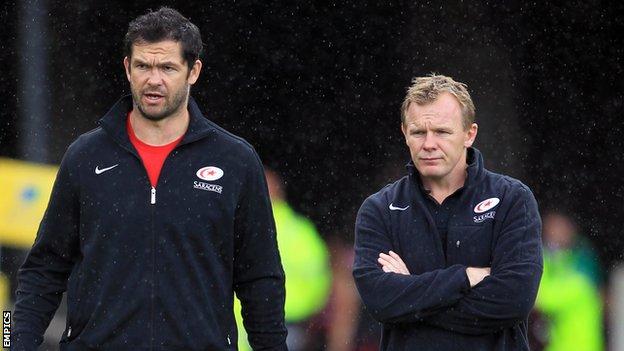 Saracens director of rugby Mark McCall believes Andy Farrell's decision to turn down a job with England shows the club is 'going places'.

"It's a huge thing for us, Andy is a big part of what we want to achieve," McCall told BBC Three Counties Radio.

Alongside temporary boss Lancaster he led the national side to four wins out of five, with Lancaster subsequently handed the job on a permanent basis.

But the Rugby Football Union were unable to prise Farrell away from the Premiership champions, who always contended the arrangement was only for the short-term.

"There's a lot more for us to achieve," said McCall. "I think Andy said we've only scratched the surface of where we are.

"We've built the foundations and now we have to kick on."

The north London club's grand plan centres on winning a maiden Heineken Cup, which will have to wait until at least next season after they were beaten by Clermont earlier in the month - but they are also desperate to achieve back-to-back Premiership titles.

Winning their last two games of the regular season would improve their chances by securing a home semi-final in the play-offs.

They face top-four rivals Exeter on the final day of the season after a trip to bottom club Newcastle Falcons on Friday.

"Two tough games to finish for us. Newcastle won down at Gloucester, which is a heck of an achievement," said McCall.

"Gary Gold has really turned things around there. It will be their last home game of the season, they're fighting for survival so it's going to be a difficult game but we'll look forward to it."

Meanwhile, fly-half Owen Farrell is likely to be fit, after missing Saturday's win at London Irish with a dead leg.