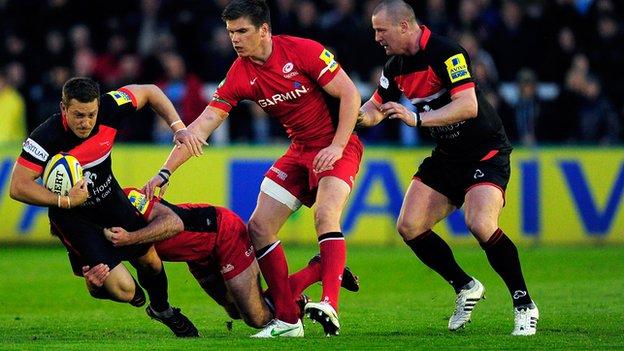 Newcastle closed the gap on Premiership relegation rivals Wasps to three points with a losing bonus point in a dramatic encounter with champions Saracens.

Sarries' win confirms their place in the play-offs and sees them leapfrog Leicester into second in the table.

England fly-half Owen Farrell landed penalties either side of half-time before Jimmy Gopperth pulled three points back for the hosts.

But despite a series of late attacks, Farrell extended Saracens' lead.

The result takes Falcons onto 28 points with one game remaining, while Wasps, who can guarantee survival on Saturday with a win against Bath, are on 31.

Were Wasps not to win, relegation would be decided in a showdown with Newcastle at Adams Park on the final day of the season.

Sarries lost England centre Brad Barritt in the warm-up but Farrell moved to inside centre with Charlie Hodgson coming off the bench to start at 10.

The visitors started the stronger, deploying their kick-chase with monotony from the off, but they were met by some stern Falcons defending and Jimmy Gopperth's boot to relieve pressure.

Farrell eventually opened the scoring on 18 minutes, having missed an earlier shot at goal, when Newcastle were penalised for not rolling away.

The champions appeared comfortable but the Falcons harried and disrupted Sarries at every opportunity.

The visitors, so strong in the line-out, dominated the set piece - with Newcastle's scrum under real pressure in the first half.

Farrell bushed the outside of the upright in the 34th minute but was on-song again after the break to double Sarries' lead five minutes after the restart.

Gopperth's first shot at goal, from just inside Saracens' half, fell just short but he made amends from 30 metres to put the Falcons on the board.

The score inspired the hosts to a series of strong carries but Sarries scored next with Farrell converting another penalty from the scrum.

Substitute Justin Melck was sin-binned with 13 minutes left for tackling Ally Hogg in the air.

Newcastle forced their way into Sarries' 22 and put together 13 phases that came to nought.

Falcons repeatedly tried to break down Saracens and came close to the line in a dramatic injury-time scramble but the champions' impressive defence held firm.

"All their points came from our scrum. Our set-piece didn't function nearly well enough in the first half at the line-out and in the second half our scrum struggled and we never got anything going from either of those but there was an incredible amount of heart.

"We probably should not have put ourselves under that much pressure to try to win the game in the last few minutes, but we said we'd fight to the bitter end and we did and showed a bit of character tonight."

"We have a better record than most there, but it's great to get one foot in the semi-final door.

"We still have the chance of a home semi-final if Quins can do us a favour, but what will be will be.

"Our work-rate tonight was terrific and we're really pleased to have won.

"Newcastle are a tough side and they were fighting for their lives, but we defended brilliantly. Our line-out defence was superb and our scrum, which hasn't been at the same level this season, was also superb tonight."