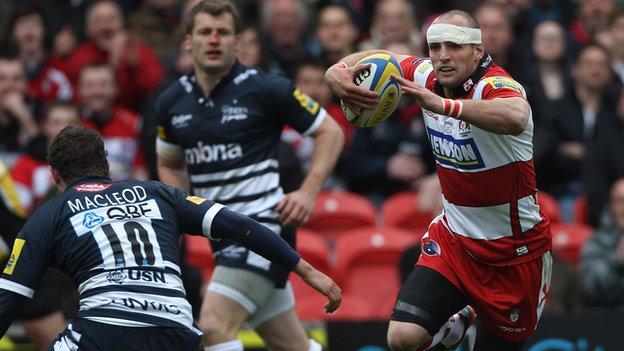 Sale all but guaranteed Heineken Cup rugby for next season with a Premiership win at Gloucester.

The result, baring an unlikely Bath win at Welford Road in a fortnight, claims the final place for English teams in Europe's lucrative club competition.

Two Rob Miller tries and 14 points from Nick Macleod's boot was enough for the Sharks to prevail.

Pre-match hype centred around Gloucester's former coach Bryan Redpath who resigned in midweek and is expected to move to Sale next season.

The tension between the sides was evident in the fourth minute when, after James Simpson-Daniel was bundled into touch, a huge brawl ensued that saw Miller and Gloucester's Akapusi Qera head to the sin bin.

The teams matched each other on every front - both playing expansive rugby and both cancelling each other out in rapid succession with penalties and then converted tries - first by Miller and then Sharples.

But the hosts took a six-point lead into the changing rooms when Burns was twice on target from the tee.

The young fly-half extended the Cherry and Whites' lead 14 minutes into the second half but a deft pass from Mark Cueto allowed full-back Miller to ghost over for his second try.

With a strong wind behind him Macleod booted Sale ahead, including an impressive effort from half way.

And five minutes from time the Welshman landed a drop-goal from 15 metres to wrap up a crucial win for the Sharks.

"This week has been emotional for many of the players. It was a special occasion with a lot of players playing their last games at Kingsholm - Scott Lawson, Alasdair Strokosch, Mike Tindall, Tom Voyce - so there was no lack of endeavour. We just lacked precision.

"We gave away two soft tries and we also didn't manage the wind in the second half and ultimately that was our downfall.

"Today was pretty much a showdown for Heineken Cup qualification and that is also disappointing with the group of players we have coming in next season. We have another game left, though, and we have to look forward."

"We are on the up and, if we can qualify for Europe, it will be a great result for the club, with the new stadium. It will be really positive for rugby in Manchester.

"We were six points down at half-time but, with the wind and with Nick Macleod's kicking, we just needed to get field position.

"We are delighted with the second-half performance with the elements. We have young backs and if they get the ball in hand, they can go through gaps.

"It is always a difficult place to come but it is good to shut their crowd up."