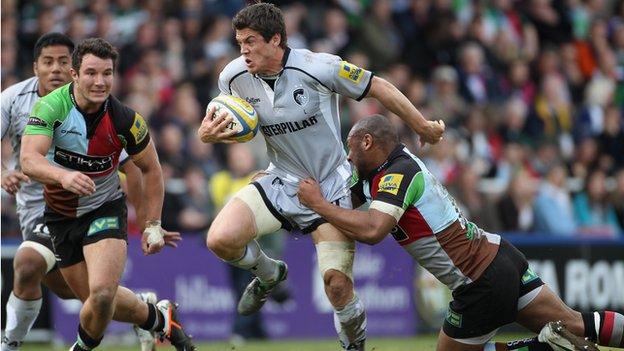 Leicester fought back twice to claim a bonus-point win over Premiership leaders Harlequins and go second in the table after a thrilling contest.

Tigers fell behind at the Stoop after Thomas Waldrom's try was cancelled out by first-half scores from Ugo Monye and Nick Easter.

Steve Mafi's try and 12 points from Toby Flood kept the visitors in touch.

The result, a first home defeat of the season for the Premiership leaders, leaves Quins on top but means Leicester go back into second and sit one point behind their opponents - who are on 71.

Both sides are now qualified for the play-offs but need to win their final games in a fortnight's time to ensure home semi-finals.

The Tigers are now unquestionably the team to beat having lost only once in their last 15 games and scored 162 points in their last four outings.

Despite conceding an early scrummage against the head it was all Leicester in the opening stages with the Tigers' confidence allowing them to twice pass up easy shots at goal.

They were rewarded when they produced an irresistable drive from five metres out which Waldrom grounded before Flood sent the conversion sailing over from out wide.

Evans pulled three points back after Leicester strayed offside and Evans and Flood traded penalties before the England fly-half threw a pass in error straight to Monye.

The winger raced away under the posts and Evans converted for a 13-10 Quins lead.

Manu Tuilagi saw yellow for holding back Lowe as the hosts probed Tigers' 22 and Evans extended his side's advantage to 16-10.

Easter bounced Tom Croft, who was subsequently carried off on a stretcher, to claim his try from the base of a five-metre scrum and Evans was again on target.

Tuilagi returned from the sin bin before Flood pulled three points back but Evans cancelled out his effort.

The Tigers struck back as they hit up midfield off a line-out and when Mafi picked up from a ruck he had a clear run to the line.

The kick, under the posts, meant the teams turned around with Quins 26-23 up.

Flood levelled the score from the tee after James Johnstone conceded a penalty at the scrum but Quins' pack went on the offensive and, after taking a scrum against the head, Evans's dink through sat up for Lowe to gather at full stretch.

Evans converted for a seven-point cushion as the game came alive with plenty to admire from both sides.

Anthony Allen's fabulous line through midfield put Leicester on the red zone and Alesana Tuilagi rounded off a devastating attack, before Flood converted to make it 33-33.

Allen was now carving up the Quins defence and his break put them back in Quins 22 before Flood, who was in total control of the game, popped outside him for Waldrom to claim his second, and the Tigers' bonus point.

Flood converted, Evans was replaced by Rory Clegg but Sam Smith butchered a great chance late on for Quins with a careless reverse pass to Mike Brown.

"Tom [Croft]'s gone to hospital, his neck's been cleared, just a sore shoulder because he caught it at the extremes.

"But you saw the strength on the squad with Steve Mafi coming off the bench, if we need to look after Tom we will. If he's fit and stops missing tackles he might get a game!

"Quins outplayed us for parts of the game and we struggled to contain that.

"But over 80 minutes we knew if we kept up our composure we would have opportunities to score tries and get back into the game. I was pleased with our patience.

"Sometimes when you have got lads who just want to play they're not patient and they force the game and you get yourselves further in trouble, but they had patience and kept playing and doing the little bits right according to our game plan."

"That was a tough physical, bruising game. I think both sides felt that they are on a great run but margins in games are so small and they took them and we didn't.

"We'll review it but I'm pretty excited at hopefully seeing them again, but we've got a lot of work to do before that.

"We didn't come out of the stoppage to Crofty quite at the same level as we had gone into it. They did and they scored 10 points that was huge to the game with the try on half-time.

"We have everything in our own hands. We know what we need to do when we go up to Sale. It will be an exciting last day of the season."