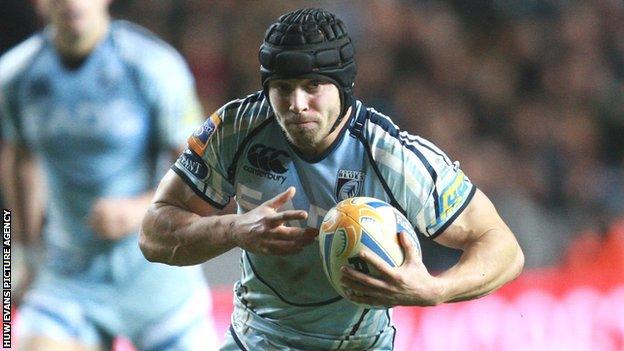 The Wales full-back ended the 2012 Six Nations with an impressive 66 points, after taking over the kicking duties and scoring two tries against Scotland.

"Leigh's still in contract, and he's in contract for another season," confirmed Holland.

"So contrary to some of the threads that are going on, he's going nowhere."

However, the Blues could yet lose Alex Cuthbert who is being courted by French big spenders thought to include Racing Metro and Toulon.

The giant wing, 21, enjoyed a hugely successful debut international season for Wales, scoring the crucial try in the Grand Slam decider against France.

"Alex Cuthbert, an offer has been made to him - a very competitive offer - and we await his decision," said Holland.

Cuthbert's rise has been so swift that he was still on a development contract at the Blues and awaiting his first senior deal.

Holland was speaking at a press conference to announce that the Blues would be seeking a new director of rugby to work above the current coaches.

The position has been vacant since Dai Young left last June to take over at London Wasps.

His assistant coaches Gareth Baber and Justin Burnell have been in charge at the Welsh region since November.

Centre Gavin Evans has pledged his future to the region by signing a two-year extension to his contract.