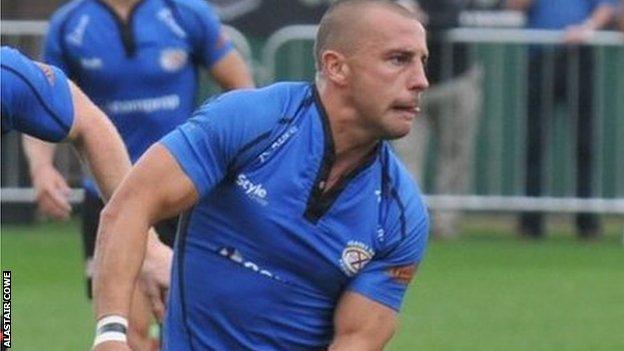 Jersey scrum-half Nicky Griffiths has been banned for the rest of the season after being found guilty of a tip-tackle in the 64-0 win over Tynedale.

The former Wales Sevens player has been banned until 16 May and fined £200.

He was sent off late on in the fixture for the tackle, but played in Saturday's win over Macclesfield.

"This is a disappointing outcome for an incident which was not malicious, did not cause injury and for which Nicky apologised," said a Jersey spokesman.

"But the current climate in rugby has put this type of offence in the spotlight and as a result he has been banned. A verdict that we have decided we must reluctantly accept.

"Nicky has been unfortunate to miss a number of games this season due to injury and now suspension but he has nevertheless played a valuable role in the squad and helped secure several important wins."

Griffiths joined Jersey in the summer but has been dogged by injuries and has not started a game since September.

He started the season as the island's number one scrum-half but has seen his place in the side taken by Dave McCormack.

The former Newport Gwent Dragons and Cornish Pirates player has made just five appearances as a replacement since December.

The island side travel to Coventry on Saturday knowing a win will secure promotion to the Championship.