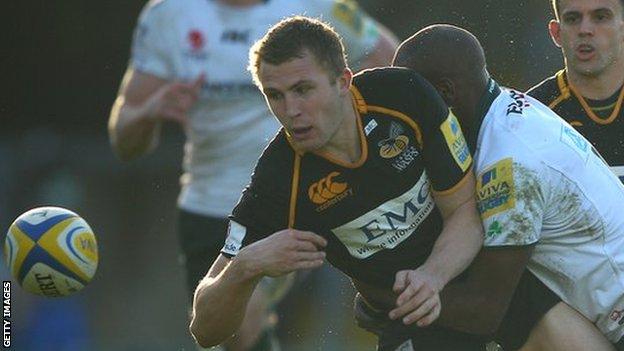 Tom Prydie would be a perfect signing for Newport Gwent Dragons, according coach Darren Edwards.

The Dragons are hoping to secure a deal imminently to sign the 20-year-old Ospreys winger, who has been on loan with London Wasps since January.

Prydie is under contract at Ospreys but has failed to establish himself there.

"Tom's a great rugby player," said Edwards. "We're interested in any good, young Welsh player. If that came about we'd be very happy about it."

Prydie, who has won four Wales caps and is a regular member of the Wales 7s side, was not named in the Ospreys Heineken Cup squad this season and has fallen behind the likes of fellow wings Hanno Dirksen and Eli Walker.

He was allowed to leave the region to join Wasps to "get more exposure" and has made eight appearances, three as a replacement, since joining the Aviva Premiership strugglers on loan.

Prydie became the youngest player to play for Wales when he faced Italy in the 2010 Six Nations aged 18 years and 25 days, and then became Wales' youngest try-scorer when he touched down against South Africa three months later.

He has failed to build on his early promise but the Dragons believe they can put him back on track for international honours.

"It would be great for him to come to this environment because our average age now [in the squad] is 22," added Edwards.

"He would fit in well and it would be great to have him."

Meanwhile, Edwards said he had no concerns over plans to create a new fifth region that would aim to represent an area currently considered Dragons territory.

Valleys Rugby have submitted a blueprint for a new professional side for the south Wales valleys, stretching from Pontypool in the east to Neath in the west.

The team behind the plans hope to meet the Welsh Rugby Union soon, and want the team to be established in time to play in the 2013-14 Pro12 League season.

But Edwards said: "There's more to running a team than just what you see on the field. The whole infrastructure that goes around the team is huge.

"This professional game has moved on massively and it will be a very tough thing to do.

"You see it the semi-professional level when teams try to step up into the next league - it's not just about the game on Saturday, it's about everything that goes with it.

"So I'm quiet sure what their proposal is but it's going to take a huge amount of finance, development and infrastructure."