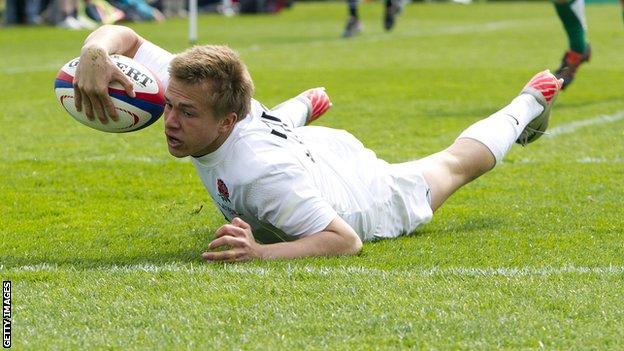 Jones became the first Channel Islander to gain an England Under-18's cap as he scored a try after coming off the bench in last week's match against Ireland.

"With my first touch of the ball I got a try," he told BBC Guernsey.

"It was probably one of the greatest starts I could have wished for, to get a try for my country and lead us on to beat the Irish."

Jones, who says his ambition is to play for the Leicester Tigers, was selected after coming through the Hampshire and South East England sides.

"I want to go professional with it, hopefully carry on, keep wearing the white jersey and hopefully go to a Premiership club," he said.

He has been part of the Guernsey Rugby Club's academy since he was seven-years-old and his coach Charlie McHugh says Jones deserves his chance in the national team.

"He has shown great determination and strength of will to get where he's got to.

"The size of his achievement is difficult to explain, but every top public school and rugby academy in the country wants to have England Under-18 players so Luke is really in rarefied air."

Guernsey's youth system has had a revamp in recent years with the club now having five teams playing in leagues in Hampshire and Sussex as they look to try to get more competitive games.

"It is giving us the competition and level of contest that will produce better players, this year we've had five county players, including Luke, and next year we hope to have more.

"We're really upping our game as an academy and we hope to attract the better sportsmen in the island to play rugby," he added.

As for Jones, his focus is now on Saturday and Guernsey's home game with Hove - victory will see the island side win London One South and gain promotion to National Three level.