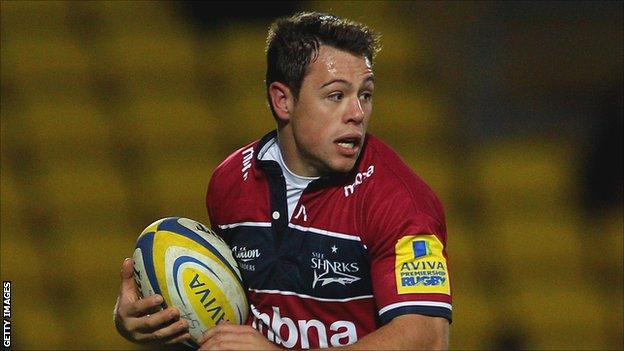 Sale full-back Rob Miller hopes the prize of Heineken Cup rugby next season will be enough to inspire the Sharks to victory at Gloucester this weekend.

Sale currently sit sixth in the Premiership table, one place and two points above Saturday's opponents.

"It's massive for us because everyone aspires to be playing in the Heineken Cup," Miller told BBC Radio Manchester.

"Especially with our move to Salford next season, we want to be playing the top teams in Europe."

Sale's 16-9 victory over Bath at Edgeley Park on Friday, in which Miller scored the only try, put the Sharks in pole position to claim the Premiership's final Heineken Cup slot.

They last featured in Europe's premier club competition in three seasons ago when they exited at the group stage.

The resignation of Gloucester head coach Bryan Redpath on Tuesday has added some extra spice to the game, with the former Scotland scrum-half heavily linked with the vacant director of rugby post at Sale.

Miller continued: "It's massively important that you look to compete against the teams in the same sort of position as you in the table.

"We're both fighting for that Heineken Cup spot so we've got to look to get the win.

"Gloucester are a quality outfit, they've got a lot of pace and exciting runners in their back line, and up front they're always strong at Kingsholm."

Sale end the season with a home game against top-of-the-table Harlequins on 5 May, while Gloucester go to London Irish.