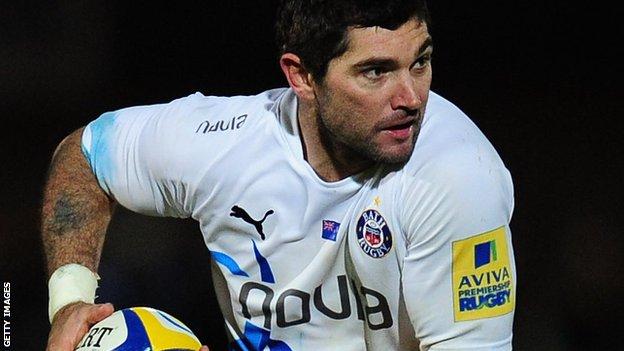 The arrival of the World Cup winner at the Rec in November was seen as a coup for the Premiership side but Donald has endured an indifferent campaign.

The 28-year-old has been restricted to just 12 appearances and three tries this term because of injury.

"This season has been disruptive in terms of arriving after the World Cup, finding form and then having a couple of injuries to set him back. It hasn't been the most stable of environments for him.

"I'm sure at the end of the season he can have a break then come back and start the pre-season.

"He's a quality player and that's why we signed him."

Donald, who has been capped 23 times by New Zealand, could make his latest return against Wasps on Saturday, after coming through a reserve game unscathed.

Bath could also welcome Kyle Eastmond into the squad for their penultimate Premiership game.

Since switching codes last year, the 22-year-old former England international has played just one game for the Bath first-team and Davis admits the utility back has had to work hard on making the switch from rugby league.

"I've talked to him a lot about the transition from league as I've been there myself," added Davis.

"He's watched a lot of games and training sessions, and has been part of a few. He's not going to be the finished product in terms of understanding but his general rugby awareness will hold him in good stead.

"He might be the spark we need in the last 20 or 30 minutes of the match. He's in our thoughts and he'll be very close to the match day 23."