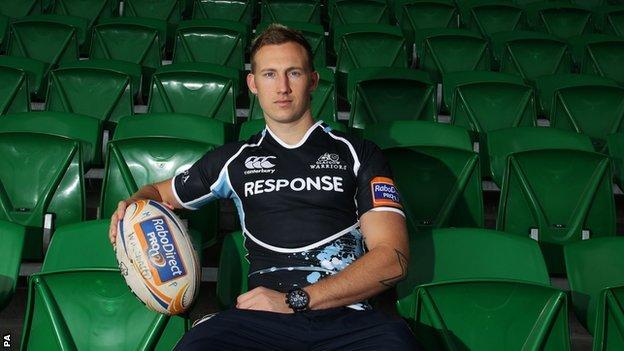 Glasgow Warriors have extended centre Byron McGuigan's contract until May 2014.

The 22-year-old has been with Scotland on the IRB Sevens World Series tour this season and scored tries in the recent New Zealand and US events.

He grew up in South Africa but has a Scottish mother.

"I'm really looking forward to running out in the Warriors black and blue when next season rolls around," McGuigan told the Warriors' website.

"I'm proud and honoured to be joining a club like Glasgow Warriors who are on the way up and have ambitious plans for the future.

"The calibre of player in the squad is strong, there are lots of quality individuals signing and re-signing and the move to the great facilities at Scotstoun Stadium is going to help the club put down roots.

"I can't wait to sample the passion the rugby public in west of Scotland have for the game when the Glasgow 7s takes place in three weeks' time."

Head coach Sean Lineen, who will be leaving the Warriors at the end of the season, added: "Byron is a player with real potential.

"We've kept a keen eye on him during his involvement with the Scotland sevens team, and we're convinced he has the right attributes to be an asset for Glasgow Warriors.

"He's strong, he's creative and he's got a great step and work ethic.

"He's primarily an outside centre, but he's capable of contributing strongly in any of the back three positions as well.

"We've been impressed with how keen he is to come here and prove himself in the RaboDirect PRO12 and Heineken Cup."